How a sprinkler system brought radio noise to a chamber and the techniques used to find and remove it.

Anechoic and semianechoic or ALSE (Absorber Lined Shielded Enclosure) chambers are supposed to prevent radio signals and other radiated noise in the environment from being detected inside the chamber.  A chamber that lets in ambient radiation is not useful for emissions testing. This article covers how a sprinkler system brought Christmas radio noise to a chamber and the techniques we used to find and remove the noise. In this case the spirit of Christmas was a little too much for the EMC engineers to bear. This is how we brought some Christmas cheer back to their last-minute end-of-year testing.

It was Christmas time; the FM radio station broadcasting nearby to our friends’ chamber was showing up like the Sears tower in the test ambient. The test engineers that ran the ALSE cleaned the fingers around the door to try to get rid of the radio signal but there was no change in the noise picked up by the biconical antenna. After some experiments they determined that the noise was mostly vertically polarized. Our friends called us and asked us to come help them. We came with an MP3 player with an FM tuner, a spectrum analyzer, an amp and probes.

A handheld radio with a digital tuner is often the best tool for picking up spurious signals in the AM (535-1700 kHz) and FM (88-108MHz) bands. Many times we have found the source of a radio signal by tracing it with a handheld radio. For example, if you are looking for broadband noise, an AM radio can be used. Tune the radio to the AM band where there is no station that can be heard. Broadband noise will come .in easily on the AM radio. This is a great way to trace wires in a wall. In this case, though, the problem was FM radio stations so we thought we might just be able to pick them up in the chamber with the handheld radio. 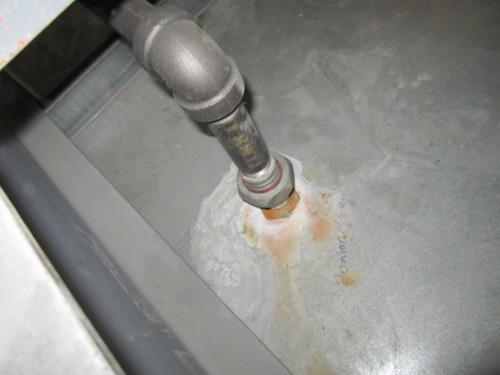 The chamber’s door was hanging slightly off vertical and was not properly seated by about a fourth of an inch at the top. We first covered the edges of the door with aluminum foil that contacted with the door edge and the chamber. We had them run an ambient scan and there was no change in the noise that reached the biconical antenna. The FM music showed up on the peak and the average line traces.

We moved our search into the chamber. We brought the spectrum analyzer, amp, probes and FM radio into the chamber. We tried locating the noise source with the FM radio. A check with the FM radio receiver did not reveal anything because the signal was too weak to detect.  Unfortunately in retrospect, the MP3 player was doomed to failure for lack of a more substantial antenna. Perhaps we would have had more success with a boom box with an extendable monopole. So we gave up on the radio and tried to use the probes.

We let the spectrum analyzer, amp and probes warm up after sitting outside in our car trunk. Electronics are sensitive to temperature and it is wise to allow them to come to room temperature before using them. We tried to pick up the signal with the commercial near field probe but the strength was too low even with the amplifier to be useful. We were hoping to use the probes to find some section of the door, cables, or other ingress/egress points that might be leaking. Finally we had to resort to using an actual EMI receiver in conjunction with our amp. We climbed high on ladder next to some of the nine sprinkler heads and low next to the corners and the door. We were not able to check all the corners because of the equipment that was in the room, including the difficulty of manipulating a tall ladder near cones. We were not able to find the FM signal with the door closed. The probes and amp’ even with the EMI receiver were not sensitive enough to find the FM signal.

We next replaced the probes with a coaxial cable having alligator clip leads to make a short dipole antenna. Even though its length was not optimized it was able to pick up the signal. In this case we were hoping that the since our crude dipole “probe” was small it might be able to resolve the location of the leak. However, there was too much variation in the signal resulting from the proximity of the wires to the person holding the cable and from the flopping of the wires to be able to make any conclusions.

Finally we had to resort to using the biconical antenna with the amplifier connected to the EMI receiver inside the room. A biconical antenna is usually useful between 20 and 300MHz, designed to pick up the FM radio stations that were plaguing it. Leaving the antenna on the tripod in the vertical orientation and locating it at various spots in the room it became very evident that the signal was coming mostly in through the center sprinkler head which was located directly above the normal test location of the antenna. Every sprinkler head had three very large ferrite rings. We tried moving all the ferrites on the center sprinkler head to one spot on the pipe and the noise became stronger. The two other sprinklers on the sides of the center sprinkler head had weaker FM signals. We wiggled the center sprinkler increasing the conductivity and the FM Christmas music disappeared. We were enthusiastic; it looked like there was a problem with a connection on the top of the chamber that we could easily solve by improving the electrical contact. The many components of a typical chamber sprinkler feed are shown in Figure 1. The brass waveguide provides the necessary electrical grounding of the sprinkler pipe to the chamber, allows for water flow to the sprinkler head, and blocks noise from coming through the hole that must be cut to allow passage of the pipe into the room. If the waveguide is not electrically contacting the chamber walls, then the sprinkler pipe can conduct radio stations into the room.

Up on top of the chamber it was easy to see the root cause of the problem. Chamber sprinklers are a disaster waiting to happen. The fire marshal requires that the system must be tested every year. During the testing sometimes the pipe connections may leak. This can spell catastrophe for an ALSE if the water leaks. This sprinkler system had leaked at some time in the past. The leakage was on the chamber roof at a connection to one of waveguides or its associated dielectric union but no one had known it. The water pooled all the way over to the center sprinkler and corroded the metal on the chamber ceiling panel beneath the brass nut that tightens the waveguide to the panel. Imagine what kind of monetary loss would have been involved if a larger leak had occurred and the panel joints became corroded. It is a good practice to periodically inspect the top of the chamber for sprinkler leaks or even for leaks from the roof. In one instance we are familiar with, a roof leak destroyed several panels on a reverberation chamber ceiling before it was noticed.  In this case, though, the oxidation/rust in the connection had shown up as Christmas radio music in the chamber. The roof was a mess. There was much rust in diverse places. We took pictures of the damage as shown in Figures 2(a) and 3(a). Engineers should always keep good records so they can pass on these lessons or at least so they have lots of cool stories to tell.

By loosening the nuts on the two affected waveguides on top of the chamber it was possible to clean out the corrosion using a wire brush. It took more than one attempt to get them clean. After the roof was cleaned and the nuts re-tightened, the signals were checked again. The FM radio noise in the chamber was worse than before. We requested bronze wool to establish a better electrical connection. Placing the wool between the nut and the chamber roof panel was the solution. One of the cleaned and repaired waveguides is shown in Figure 2(b). Corrosion was also present at one of the ceiling panel joints. Since we could not take the joint apart to clean underneath it, we decided to clean the panel next to the joint and place conductive tape to form a bridge between the joint and the panel as shown in Figure 3(b). The Christmas radio signal we saw on the EMI receiver disappeared! A new trace run on the chamber (see Figure 4) confirmed the absence of the Christmas radio noise and reinstated the chamber engineers’ Christmas spirit. 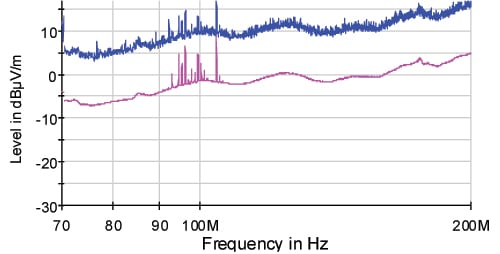 John Suriano is a graduate of GMI Engineering & Management Institute (BSEE) and has graduate degrees from Purdue University (MSME, Ph.D.). He supervises an EMC laboratory for Nidec Motors and Actuators in Auburn Hills, Michigan. He has interests in electric motors and electromagnetic modeling.

The HF Current Probe: Theory and Application
Next Post »

10 inches narrower and 20 pounds lighter than a standard 4x60/100 amp filter panel, with no reduction in performance or quality. Designed for secure … END_OF_DOCUMENT_TOKEN_TO_BE_REPLACED

Sponsored by Schurter SCHURTER’s innovative FMAD CEE and FMAB CEE connectors, according to IEC 60309, feature a first of its kind integrated line … END_OF_DOCUMENT_TOKEN_TO_BE_REPLACED

STAR Dynamics is proud to host the 43rd Annual Meeting and Symposium of the Antenna Measurement Techniques Association (AMTA) at the world-famous Daytona Beach, Florida, USA from October 24-29, 2021. STAR Dynamics and co-hosts, Applied Research Associates and Florida International University, cordially invite you to attend and participate in this annual event.

If you need to reduce development time, increase quality, and decrease product failures, you need to attend Automotive Testing Expo! The event is America’s largest vehicle and component testing and validation technology and services exhibition, featuring more than 370 exhibitors and attracting over 6,000 attendees.

This must-attend industry event gathers global decision-makers in telco, tech, and adjacent industries with North American digital leadership at the forefront. Attendees from around the world come to LA to

This must-attend industry event gathers global decision-makers in telco, tech, and adjacent industries with North American digital leadership at the forefront. Attendees from around the world come to LA to learn from North America’s leaders about the future of 5G, IoT, and Telco Cloud.

AES 2021, the 8th International Conference on Antennas and Electromagnetic Systems to be held in the fascinating city of Marrakesh, Morocco, from November 16-19, 2021. AES 2021 will feature several

AES 2021, the 8th International Conference on Antennas and Electromagnetic Systems to be held in the fascinating city of Marrakesh, Morocco, from November 16-19, 2021. AES 2021 will feature several Plenary and Keynote Lectures by world-leading experts on antennas and electromagnetics.

AES 2021 will initiate a series of technical tutorials instructed by world-leading experts on various topics of interest to the AES community. Tutorials are intended to provide a high-quality learning experience to conference attendees.

In parallel with the Technical Program, we have prepared a full range of social activities for our delegates and their accompanying persons during all days of the Conference: click!

If you are interested in organizing a Special Session or a Symposium, please contact us at [email protected].

Further details on AES 2021 can be found at the website: https://aesconference.org