BMWBlog, Motherboard, TeslaForum, and others are reporting severe customer blowback regarding the decision by BMW and Tesla to remove or disable the AM radio function in the BMW i3 and Tesla Model X vehicles. The Tesla Model S is also affected.

The reason is that EMI noise from drive motors and associated electronics is creating sufficient interference in reception that it renders the AM broadcast band useless. Tesla has somewhat remediated the issue by supplying a variety of major AM station broadcasts via TuneIn’s satellite downlink. However, owners seem to prefer the ability to directly tune in their own local stations to hear local sports and talk shows, which predominantly use the AM broadcast band. One owner even carries a large portable AM radio along on travels.

According to the BMWBlog, “those that own the [all electric i3] have started blogs and gotten on forums to complain about AM radio missing and some have even tried to hack AM radio back into their cars.” The blog says, “due to AM radio’s following, many automakers, BMW included, are looking for a way to reduce and eliminate the interference that comes from electric vehicles. If automakers can shield the wiring, and possibly even the electric motor, than the interference could stop.”

Meanwhile, the new Tesla Model X also dropped terrestrial AM radio from its infotainment dashboard and instead provides most AM stations via internet radio, but requires you to “go menu diving” through TuneIn, a service that aggregates internet radio and traditional AM/FM stations. TuneIn is the standard radio option on Tesla vehicles. However, its apparently not easy to locate the stations and there’s even a Tesla forum devoted to figuring out how to find AM stations on the Model X. Meanwhile manufacturers are trying to find solutions to the EMI issue. 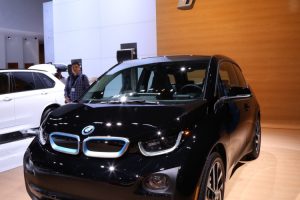 10 inches narrower and 20 pounds lighter than a standard 4x60/100 amp filter panel, with no reduction in performance or quality. Designed for secure … END_OF_DOCUMENT_TOKEN_TO_BE_REPLACED