Well . . . I’m back.  I hadn’t planned on being out of print so long and it will take a few paragraphs to bring everyone up to date.
A number of you learned at the IEEE EMC Symposium in Pittsburgh that my family and I were taking our little travel trailer on an extended camping trip immediately after the symposium.
There were several National Parks that we have wanted to visit but they have always been too far out of the way.  Our goal on this trip was Mount Rushmore – South Dakota, Glacier National Park – Montana, and Mesa Verde – Colorado . . . filling in with others (some repeats) such as Henry Ford Museum/Greenfield Village, Yellow Stone, Bryce Canyon, the National Boy Scout Museum, etc., along the way.
We also ate in a number of out-of-the-way places listed in the Road Food Guides.  Many of these are on historic US-66 in little towns that look a lot like Radiator Springs from the movie Cars staring Lightning McQueen.  This move is based on Route 66 (where you get your kicks) and an internet search will reveal where the various places in the movie are located along the route.
This was a fun filled 6 week trip that that started August 12th right after the EMC Symposium and ended on September 23rd.  During that time we traveled 12,289 miles through 33 states.  Our biggest expense category was $5,100 for gasoline – such a shame!  BTW: If any of you are thinking about doing your own Great American Road Trip and want to send me an email for an opinion feel free to do so.  Note however, if there turns out to be a lot of emails I may not be able to answer each of them individually.
When we started we learned almost immediately that in the National Parks the radiated emissions are low and that the World Wide Web really isn’t worldwide.  It certainly hasn’t reached most of the National Park System.  This disappointed my 11 year old grandson who thought he would play games on the internet instead of hiking.  I was surprised to learn that in some park areas we had to travel as much as 30 miles outside the park just to be able to use our cell phones.  From this you could almost conclude that it must have been really great not having to worry about EMC problems.  That was not the case.  Sometimes there’s a problem with conducted emission and susceptibility.
We learned the hard way that if someone else with a big 220 volt RV system having much greater electrical demand makes a mistake and tries to share your wimpy little electrical box they can create a DM voltage transient that may destroy your DC electrical converter, your radio, and your computer.  Fortunately I have a second computer.  Unfortunately it was at home in Florida and I was in North Dakota. .
I’d like to continue on my soap box about dastardly DM currents and their conducted issues.  We need them but oh what a pain they can be.  Often the differential mode (DM) currents are functional currents and our widget won’t work without them — we just don’t want the associated conducted or radiated emissions.
The good news is that conducted emissions are confined to the conductor so that even if we are unable to reduce the driving source levels during design we can get a big hammer and beat them into submission.  Brute force filtering is certainly not elegant but it does work.  Probably if I had had a great big filter on the power input to my travel trailer I would have already published this material.  I can tell you that I will have transient suppression before I take it out again!
The primary problem with DM current is RF radiation.  In Figure 1, the green electrons flowing around the loop with area (A) = L * S represent the DM current.  If we make the assumption that the current is the same in all four segments of the loop, the greatest levels of radiation in this figure will be from the horizontal segments because they are the longest. The constant current assumption is reasonable so long as the loops perimeter is electrically small. Once the loop size versus frequency allows standing waves to develop this assumption no longer holds. 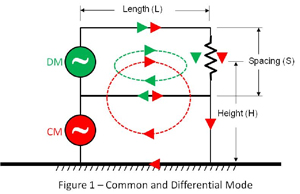 The vertical segments are cross polarized and thus do not contribute to the radiation from the horizontal segments and vice versa.  The horizontal green electrons are flowing in opposite directions and if they could be superimposed their radiated fields would cancel.  But that can’t happen.  The closest that we can bring the wires together (smallest S value) is twice the insulation thickness.  This results in creating a loop antenna with area A = S * L having a null along a plane passed through the centerline of the broadside of the loop and maximums on either side in the plane of the loop itself.  As the spacing S increases there is less cancellation and the radiated field strength increases.  Restating this more bluntly:  Keep high frequency, high speed, high current loops as small as possible!!!
A simplified radiated emission model for the DM case can be developed by assuming that each wire of length L behaves as a small dipole, the two dipoles are out of phase, and they are separated by spacing (S).  This gives the following relationship for the electric field (E) at a distance (d).
E = 1.316  A  I F2 / d
Where:
E = Field strength in microvolts/meter
A = L * S = loop area in sq cm
I =  Current in Amps
F = Frequency in MHz
d = Distance to observation point in meters.  Usually the measurement distance.
Let’s try it out for size, just to see how it works.  Assume that a replaceable electronic module for a space application has a 0.5 meter (20 inch) jumper cable with a 1 mm wire pair spacing that interconnects two subsystems.  This cable is carrying a 3.5 ma data signal running at a frequency of 50 MHz.  Will it meet the MIL-STD-461F RE102 requirement?
Calculating the electric field E at 1 meter gives:
E = 1.316 * 0.5 * 100 * 0.1 * 3.5 x10-3 * 502/ 1 =  57.6 microvolts/meter
Converting to dBuV/m gives:
dBuV/m = 20 log 57.6 = 35 dBuV/m.  The MIL-STD-461F spec limit at 50 MHz is 24 dBuV/m!
Houston — we have a problem!
– Ron Brewer

Among the many antennas, probes, preamplifiers, etc. that we sell, the AK-40G Antenna Kit is arguably the most popular. In one convenient package, the … END_OF_DOCUMENT_TOKEN_TO_BE_REPLACED