The flag-ship laboratory quality standard in the world is ISO/IEC 17025–General Requirements for the Competence of Testing and Calibration Laboratories. Based on years of experience using the standard, the author is recommending that the standard be divided into two standards—one for testing laboratories and one for calibration laboratories. This recommendation is based on the confusion that arises in Clauses 4 and 5 of the standard’s treatment of the essential missions of testing labs and calibration labs. Another factor is the unique, vital procedures carried out by all calibration labs. In contrast, testing labs deal with a wide range of disciplines; any given test lab might not offer the capabilities of other facilities operating as test labs. A look at the Table of Contents of the present standard is instructive. 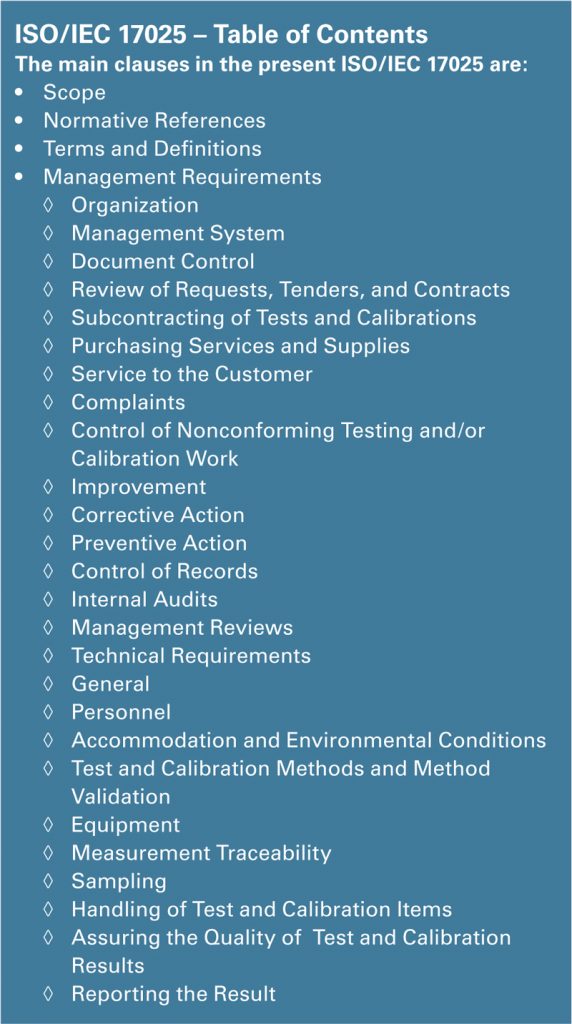 The first three clauses of the standard are Scope, Normative References, and Terms and Definitions. Clearly, the scope would have to be changed since it attempts to address both testing and calibration laboratories. A modified Clause 1.1 might read as follows for testing labs: This International Standard specifies the general requirements for the competence to carry out tests including sampling. It covers testing performed using standard methods, non-standard methods, and laboratory developed methods.

The Normative References in Clause 2 would change only slightly for either the testing or the calibration laboratory standard. Similarly the Terms and Definitions in Clause 3 would also remain much the same for both testing and calibration labs since this clause simply cross-references ISO/IEC 17000 (Conformity Assessment – Vocabulary and General Principles) and VIM (International Vocabulary of Basic and General Terms in Metrology).

Management Requirements is the subject of the fourth clause of ISO/IEC 17025. This part of the standard, of course, is closely aligned with ISO 9001. In fact, Annex A of ISO/IEC 17025 is an informational annex that consists primarily of nominal cross-references between ISO 9001:2000 and ISO/IEC 17025. Throughout Clause 4, the term “testing and calibration” would have to replaced with “testing” or “calibration.”

One important clause that would be clarified by splitting the standard into two standards is Clause 4.5 (Subcontracting of Tests and Calibrations). The 2000 version of ISO 9001 changed the definition of “subcontracting” and that has led to much confusion in the laboratory arena. (Clause 3 of ISO 9001:2000 states that the relationship designated by supplier-organization-customer has replaced the older trilogy of subcontractor-supplier-customer from ISO 9001:1994). This confusion is more prevalent in laboratories in non-English-speaking countries.

Thus, for testing laboratories, Clause 4.5.4 would read “The laboratory shall maintain a register of all subcontractors that it uses for tests and a record of the evidence of the compliance of those subcontractors with this International Standard for the work in question.” For testing laboratories, this would eliminate the confusion between “subcontracting testing” and “subcontracting calibration.” In other words, testing labs could subcontract testing to other qualified testing laboratories, but to comply with best practices, they would have to purchase “calibration services” from external vendors. (This requirement is covered under Clause 4.6—Purchasing Services and Supplies). It is hoped that, in the future, we continue to see a continued alignment of the management requirements in ISO 9001 and Clause 4 of ISO/IEC 17025. 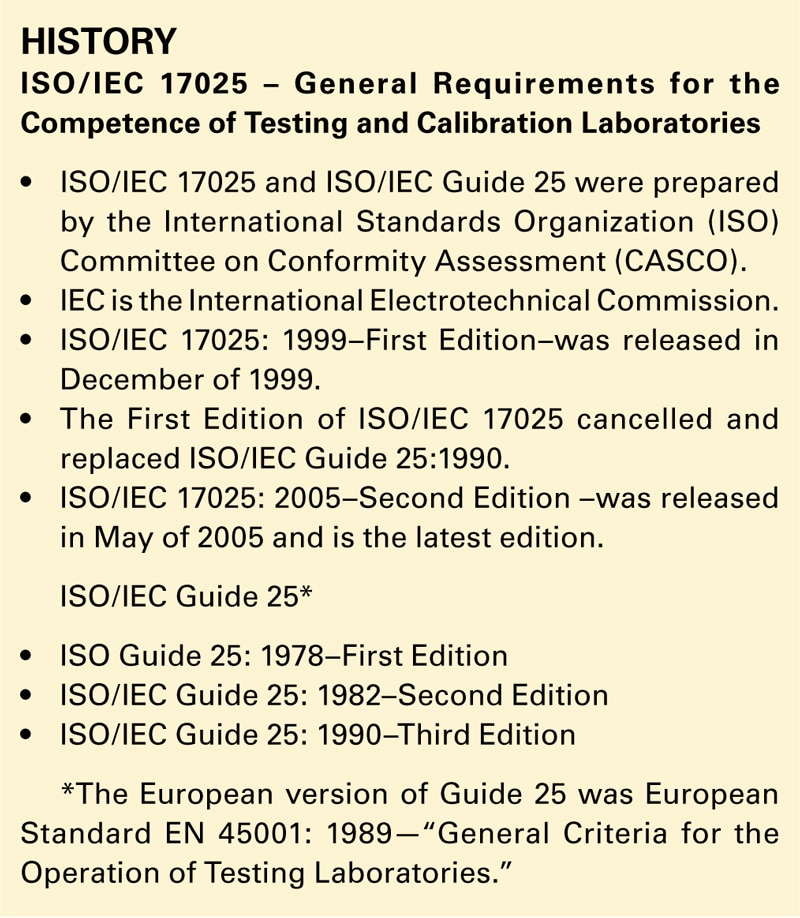 I would recommend that Clause 5.1 (General) be deleted from both the proposed testing and calibration laboratory standards. It appears to be simply a placeholder, and it is very difficult to assess a laboratory to the requirements of 5.1. The measurement uncertainty covered in 5.1.2 could be covered more appropriately in Clauses 5.4, 5.5, and 5.6.

The title of Clause 5.4 should be altered to read “Test Methods and Method Validation” for testing labs. For calibration labs the title would read “Calibration Methods and Method Validation.” There would be a separation of testing and calibration throughout the clause to differentiate between the two functions. It would be appropriate to move Clause 5.4.5.1 into Clause 3 (Terms and Definitions) since it is the definition of validation—viz., “Validation is the confirmation by examination and the provision of specific evidence that the particular requirements for a specific intended use are fulfilled.”

Clause 5.5 on Equipment would require some simple changes in wording depending on the type of lab. For example, Clause 5.5.12 would read as follows for testing labs,

Clause 5.7 on Sampling would remain basically the same with some simple changes in wording to distinguish the testing and calibration activities.

Daniel Hoolihan is a past president of the IEEE EMC Society. He has been a member of the Board of Directors since 1987 and has held numerous leadership positions in the society. Dan is also active on the ANSI Accredited Standards Committee on EMC, C63 as Vice Chairman. He was co-founder of Amador Corporation (1984-1995). He can be reached at [email protected]