When first mandated in the 1990s, the stated objective of the EU’s Directive governing EMC was, in broad terms, that commercial and domestic equipment, and certain industrial systems, should neither cause interference or be susceptible to interference. They should not emit radiated or conducted energy at RF frequencies and they should be immune to such emissions, within specified limits. Some sectors of the industry found the initial specified limits challenging to achieve, despite the fact that the first round of standards were based largely on practice that had been widely required in military equipment procurements for decades prior to their adoption into the commercial arena.

What was initially ambitious has become routine, but now those involved in design and test for EMC compliance are faced with a new challenge – the need to verify emission and susceptibility performance above 1GHz. The key date is 1st October 2011, when EN55022:2006 +A1:2007 becomes the only version of the relevant standard that will support compliance to the technical requirements of the EMC Directive. In fact, 1st October marks the end of a transition period, during which device manufacturers could choose to test products either to the latest revision or to the prior version EN55022:1998 (with amendments A1:2000 and A2:2003).

In many respects, the Directive is merely catching up with the reality of the environment in which today’s consumer and commercial products operate. Since the 1998 formulation of the standard, the number of devices in common use that employ frequencies in excess of 1GHz has multiplied many-fold. Cellular radio uses bands at 1800 MHz, 1900 MHz for 2G services, and at 2100 MHz for 3G services; WiFi, Bluetooth and innumerable other services crowd into the 2.4 GHz unlicensed band; and, perhaps most sensitive of all to interference, Global Positioning System satellites transmit in L-band at 1575 MHz. Given that GPS receivers must work with a signal of the order of -130 dBm, and observing the proliferation of products and systems that depend on dependable GPS reception, it could be argued that the arrival of regulatory supervision of radiated emissions above 1 GHz is somewhat overdue. 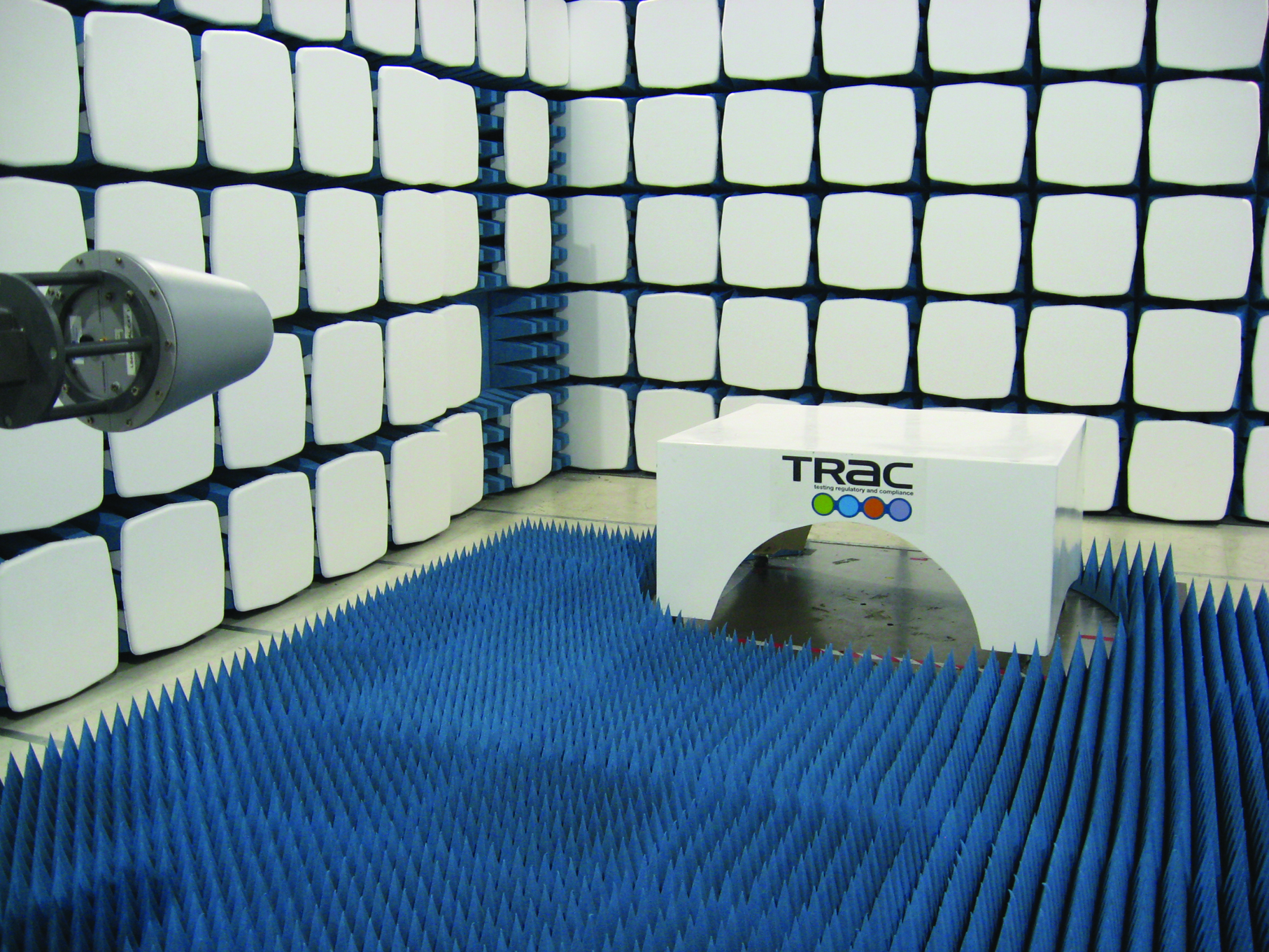 On the “aggressor” side of the equation, there has also been a massive increase in products that, potentially, can be the source of over-1-GHz emissions; specifically, digital systems and microprocessor-based products with clock speeds in the hundreds of MHz or greater.

Some of the delays associated with the introduction of limits above 1GHz have derived from the 3G-cellular operators. In the UK, they bought their spectrum licences for the unprecedented figure of £23 billion; not surprisingly, they would like a noise-free environment in those bands. Any increase in the general noise floor reduces the coverage of a given base station and increases the number of base stations they must install, which increases costs. The operators were initially reluctant to endorse a standard that specified a permissible level of emissions in “their” bands, on the basis that once a limit has been set, it is very difficult to reduce it.

Nevertheless, EN55022:2006 +A1:2007 is now with us, and it will apply to all information technology equipment, and to microprocessor-based products. While it is unlikely to present technical and logistical challenges on the same scale as did the arrival of the initial EMC Directive, it has implications throughout the product design and certification process. There are increased costs to manufacturers in performing pre-compliance testing, increased costs to test labs that provide the measurements, and these are likely to be passed on – where market conditions permit – to the consumers who purchase the products.

Product design teams that already follow EMC-aware, best-practices rules may encounter few changes; those that are less rigorous run the risk of having products fail testing where previously they would have anticipated a smooth path to certification. All of the familiar potential sources of emission and susceptibility must be considered in the context of higher frequencies. A few cm of PCB track may be a very poor antenna at 300 MHz and a wavelength of 1m; but very efficient at 3 GHz and 10 cm. Similarly, apertures that pass negligible energy at sub-1-GHz frequencies become significant at the new limits. 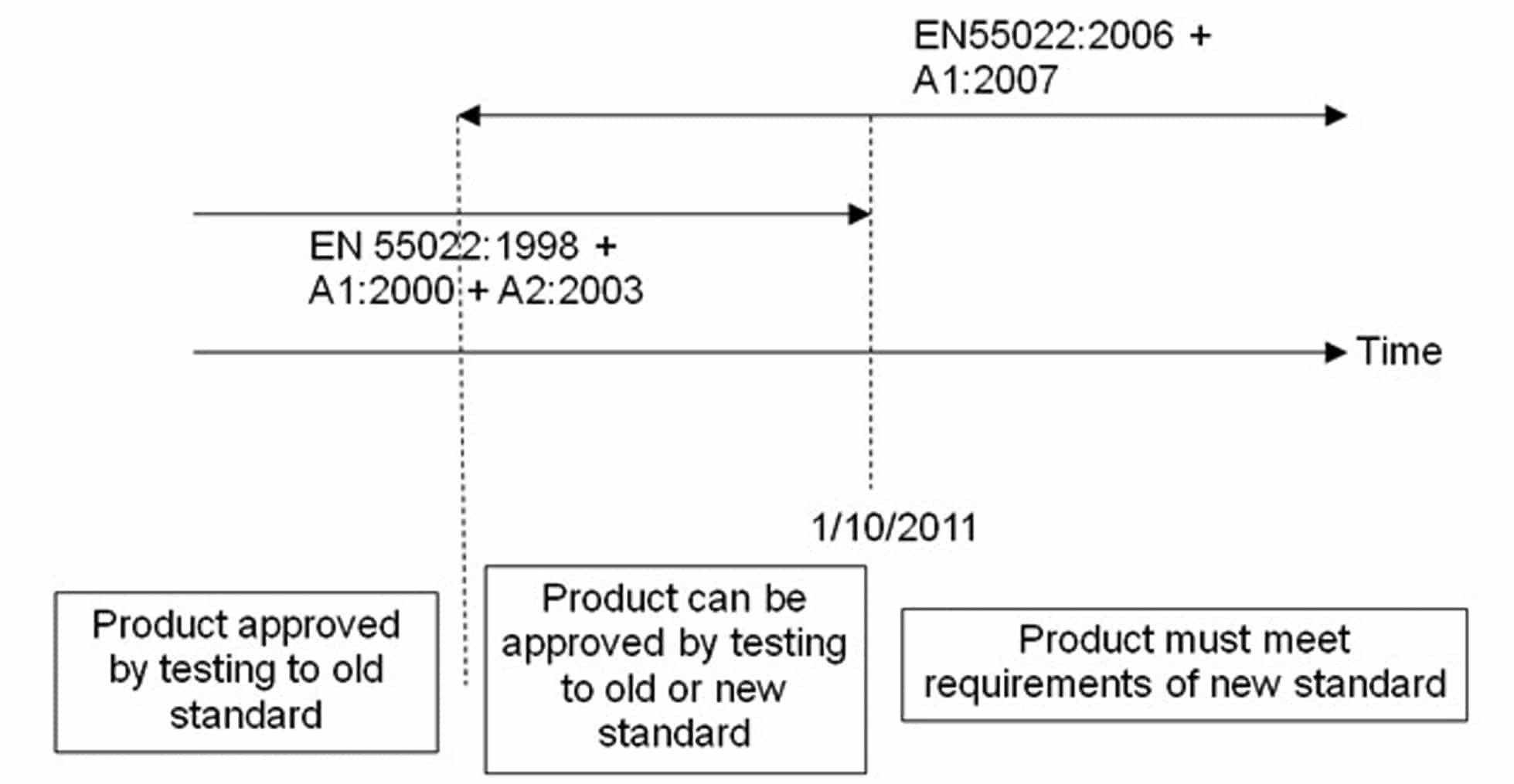 In the test or pre-compliance phase, material properties may take on a new significance. An open-area test site (OATS) might employ a lightweight equipment cover that is completely transparent to RF below 1 GHz, but may not necessarily be so when calibrated to the new parameters.

Test labs around the world that perform measurements to EN55022 have had to ensure that their test equipment covers the extended frequency range, invest in new antennas where they were limited previously, upgrade cables and finally calibrate their chambers to the new SVSWR requirements in the frequency range. Meeting this upgraded specification for the reflectivity of the chamber lining at higher frequencies can mean enhancing or re-lining a chamber.  A poorly funded lab will find these additional requirements very challenging due to the sums of money involved.

EN55022:2006 +A1:2007 does, however, recognise the implications of the architectures of today’s IT products, in that it scales the testing regime according to the maximum frequencies used by the design, as listed in Table 1. The highest internal source of an EUT is defined as the highest frequency generated or used within the EUT or on which the EUT operates or tunes. Current microprocessor-based designs invite careful interpretation, and the testing requirements may not be as onerous as they first appear. It has become common practice to quote the clock speed of a multicore processor as a figure of several GHz: however, this may be an aggregate “marketing” figure derived by adding numbers over multiple CPU cores, and the maximum clock speed encountered anywhere on the PCB may only be in the low hundreds of MHz.

In addition to the high frequency tests required, manufacturers will need to limit the electrical noise from ‘telecommunication’ cables. Whilst this requirement was introduced in previous versions of the standard, the date of withdrawal from the Official Journal of the EU of the older standard meant that many manufacturers have overlooked this requirement until now.

Outside Europe, and the context of the EU Directive, the FCC in North America already sets emissions requirements above 1GHz. The same conditional rules apply to upper frequency of test, but FCC requirements ultimate extend to 18GHz. US exporters to the EU will, therefore, not see any differences compared with domestic arrangements – although the FCC does not require immunity testing. Equally, within the EU many of the product family standards that use EN55022 as their reference standard will be updated to reflect the new requirements. We have already seen EN61000-6-3 and EN61000-6-4 (generic emission standards for both domestic, commercial & light industrial and industrial products) amended and published. These will be listed in the Official Journal of the EU shortly, paving the way for more standards to require the additional tests in due course.

It should not be assumed that all EMC emission standards will require above-1-GHz measurements – the requirements have to take into account the density of use and the operating environment. Take an ISM-band RF welding machine, or perhaps an induction heater, as examples – these are used in noisy industrial environments where wireless communication is already very difficult. If there is no likelihood of deployment of systems, in its locality, that a machine might interfere with, then the option exists to declare that certain aspects of compliance are irrelevant. A study of these particular examples may not have been performed, but it shouldn’t be assumed that testing above 1GHz will be required if there is no benefit to the wider community.

While the extension of EMC testing to above-1-GHz is unlikely to produce the same last-minute frenzy of activity as did the initial introduction of the Directive, experience indicates that some manufacturers will leave testing as late as possible to maximise product development time and control test costs. However, the changes discussed here will mean that fewer test houses will be available to perform the testing before the October 2011 deadline, which could leave manufacturers left without compliant products for some time – especially if a redesign is required as a result of the additional requirements.

Steve Hayes is Managing Director for the EMC and Safety business of TRaC and has been involved in EMC and product approvals for 19 years. In addition to the day to day running of the business, Hayes is actively involved in EMC standardisation both in commercial and defence areas. In addition to being the UK Principal expert on EMC standardisation of Industrial, Scientific and Medical (ISM) products, he is also the convenor of CISPR/B/WG1 who has the responsibility of writing the International standard, CISPR 11. Hayes wrote the CE marking annex to the UK’s defence EMC standard as well as being co-convenor of CENELEC TC210/WG9, responsible for writing a guide on approval of military systems with commercial (CE Marking) requirements.

Presented by Quell - Filter seals can be used to retrofit any connector with EMI and transient protection. Download this application note to learn … END_OF_DOCUMENT_TOKEN_TO_BE_REPLACED