Power Transfer and Data Transmission in One

Waldenburg (Germany), 30 October 2018 – Würth Elektronik eiSos and Infineon Technologies AG have jointly brought a development system for wireless power transfer onto the market. Two aspects distinguish this development kit: On the one hand, it serves to develop applications outside the Qi standard up to a power of 200 W. Data can also be transmitted via transmitter and receiver coil, as well as receiver sending data to the transmit coil. A manual is available online and explains the innovative method of modulating the alternating field between transmitter and receiver. Options include sensors and a display board to test scenarios for data acquisition, forwarding and display. The development kit is available online with the order code 760308EMP.

“As the manufacturer with the largest portfolio of wireless power coils, for some time now we have received repeated inquiries from customers looking for higher power applications beyond the Qi standard,” explains Cem Som, Division Manager Wireless Power Transfer at Würth Elektronik eiSos. “With our development kit we address just these applications up to a power of 200 W. The circuit can be scaled from 10 W up to several kW. The currents in the resonance circuit are sinusoidal which ensures good EMC performance. The secret: By changing the switching frequency, the output voltage changes and data can be transmitted from the receiver to the transmitter.” Possible fields of application include Industry 4.0, IoT or medical technology, for instance. Wherever there are harsh environments with any cable and connector openings in enclosures which should be avoided, such as in the case of wireless battery charging, it may be expedient to convey status messages.

The 760308EMP-WPT-200W development kit includes a power supply unit, a transmitter and a receiver unit.

The transmitter side consists of a full bridge and a resonance circuit. This is formed from the series connection of the WPT coil and the resonance capacitors. As a result of the phase shift between the voltage and current in the resonance circuit, the system works in ZVS (Zero Voltage Switching) mode. This leads to a very high efficiency of the overall system.

An application example that can be simulated with sensors at the I²C interface of the receiver board: While charging, a mobile device sends data to a base station. All data and documentation necessary to realize a proprietary system of this kind are freely available for downloading.

The following images can be downloaded from the Internet in printable quality: http://www.htcm.de/kk/wuerth 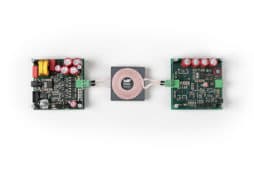 About the Würth Elektronik eiSos Group

Through its technology partnership with the Audi Sport ABT Schaeffler Formula E Team and its support for the Formula E racing series, the Group demonstrates its innovative strength in eMobility
(www.we-speed-up-the-future.com). Other global growth markets, such as Energy Harvesting, Internet of Things and Wireless Communication, are addressed with innovative products.

The Würth Elektronik eiSos Group is part of the Würth Group, the world market leader for assembly and fastening technology.

Würth Elektronik: more than you expect!

Presented by AH Systems - This bilogical Antenna provides an inexpensive solution to wide band applications. Whether testing inside a shielded … END_OF_DOCUMENT_TOKEN_TO_BE_REPLACED

Presented by AH Systems - Engineers were not meant to be caged in cubicles or meeting rooms, engineers were meant to calculate. Their pencil … END_OF_DOCUMENT_TOKEN_TO_BE_REPLACED