We often wonder how good you are.  Want to start a heated argument in the EMC community?  Just start talking about grounding systems and why the Star or single point ground (SPG) system is so-o-o-o much better than those ridiculous multipoint ones being used by all those other people. Really? Are they that good?
Before I answer that, let me first mention Scott Roleson.  Scott is an EMC expert with HP.  He and I served overlapping tours as Distinguished Lecturers for the IEEE EMC Society.  This is where you go unto all the world, make EMC technical presentations and eat rubber chickens.
Scott had an outstanding presentation in which he stated that there are three answers that every EMC engineer should commit to memory and be able to voice instantly when necessary:
Answer number 1:  Yes, we have to have that!
Answer number 2.  No, you can’t take that out!
Answer number 3:  It all depends!
The reply to the question about which is better, the Star or SPG ground system, is:  Answer number 3!
It all depends on the signal frequency range and if there are noise currents flowing in the ground system.  For example, the blue electron current (I) in Figure 1A is created by a source external to the system and, because of grounding system impedance between points a and b, a CM voltage Vab = I * Zab is developed between the two ground points.  This voltage (Vab) drives current around the loops formed by our system.  Some take the low road, while some take the high road and excite both CM radiation from the loops and any cabling associated with them. 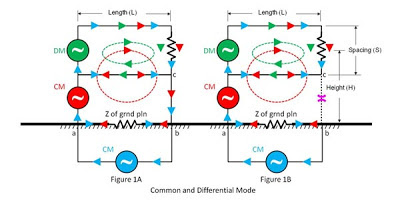 In addition, the low road (a.k.a. the return path) has lower impedance than the signal path because the blue return path electrons do not have to pass through the source and load impedances.  This unbalanced CM current creates a DM voltage across both the source and load, which contaminates the desired DM signal.
Moving points a and b closer together reduces Vab. Changing the ground plane to a lower impedance material also reduces Vab.  Connecting all the grounds to either a or b eliminates Vab.  In a really small system that might work, but in a large system the conductor lengths have to increase—so does their inductance.  Those who read the last post know that this is a bad thing.
One way around this shortcoming is to use a SPG system. This is illustrated in Figure 1B.  Remove the inductive conductor from c to b and replace it with distributed parasitic capacitance from all system conducting surfaces to the underlying ground plane.  This is illustrated as a lumped capacitor from c to b.  The grounding conductor that was removed has a reactance XL = 2π f L, and the parasitic capacitance that replaced it has a reactance XC = 1 / 2π f C.  The long Star conductors work okay at low frequencies, but fail as frequency increases because the conductors no longer have a low impedance.  The SPG works great at low frequencies, but fails as the frequency increases because the capacitance no longer has a high impedance.
What can we conclude?  The Star and SPG work great at the lower frequencies, but parasitic capacitance interconnects all conducting surfaces as the frequencies increase.  At high frequencies, this forces the system into a multipoint cross-coupling and grounding configuration no matter what.
While these choices are being considered, think about what happens in the mid range of frequencies.
– Ron Brewer

Presented by AH Systems - The antenna is one of the least understood components in an EMC test instrumentation set-up, and a poor choice of antenna(s) … END_OF_DOCUMENT_TOKEN_TO_BE_REPLACED

Sponsored by Schurter SCHURTER’s innovative FMAD CEE and FMAB CEE connectors, according to IEC 60309, feature a first of its kind integrated line … END_OF_DOCUMENT_TOKEN_TO_BE_REPLACED

Among the many antennas, probes, preamplifiers, etc. that we sell, the AK-40G Antenna Kit is arguably the most popular. In one convenient package, the … END_OF_DOCUMENT_TOKEN_TO_BE_REPLACED