I just finished rearranging my office. It all started with buying a new MS Windows 8 computer (that’s a story all on its own) followed closely by the failure of my printer to feed paper. So I bought a new printer, which is about two times bigger than my old one, and it wouldn’t fit in the previous location. So I moved my little flat screen TV into the old printer location and decided to change everything around so I could locate the printers on the other side out of the way. This of course required longer Ethernet cables. I finally finished my office and discovered that when I sent data to the printers, I had noise on the TV and on the AM radio band. This prompted my wife to remind me that the plumber’s faucets leak, the roofer’s roof leaks (but only when it rains), and the HVAC’s service tech’s air conditioning only works during the wintertime.

We just can’t escape from ground loops! They’re everywhere! Except for battery powered or doubly isolated electrical equipment almost every other electrical device has a three prong power connector and one of the pins is the green wire (or green/yellow) safety ground. We end up with something that looks like the following figure. 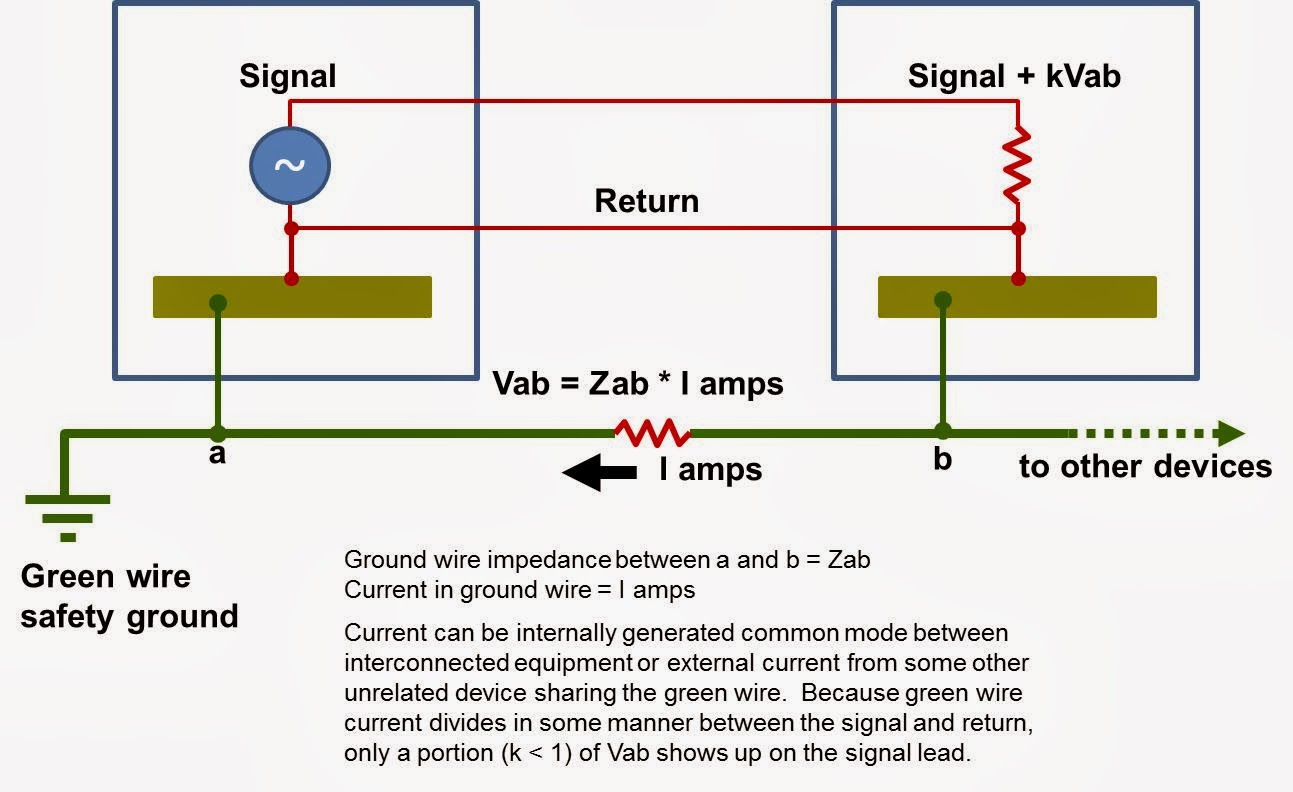 It’s not blatantly obvious, but there are three primary EMC coupling problems being illustrated in this figure that are associated with the green wire safety ground:

Fortunately for most balanced signal transmission the conversion from common mode to differential mode is not very efficient and at the lower frequencies is on the order of -20 to -40 dB. Circuits using differential signaling and high grade cabling will generally have a balance value of 60dB (0.1%) or greater. For example, typical commercial CAT-5 cable (when new) will provide balance greater than 70 dB at 1MHz (60dB up to 10 MHz). For worst case analysis, the following conservative values can be used for CM to DM conversion:

2. The green wire forms a pick-up loop. This loop can behave as a low impedance magnetic field antenna and is sensitive to lower frequency magnetic fields being created by high level AC current loops, especially nearby switched mode power supplies. This statement is not meant to imply that loop antennas can’t pick up high frequency electric fields. They can and they do . . . and their sensitivity increases as a function of both loop area and frequency. The energy picked up by the loop results in common mode conducted currents like the first problem described above and can be mitigated using the same techniques.

3. The green wire loop acts as a radiator.

This topic requires more words in order to do it justice so I plan to cover it in more detail in the second part of this post along with the solution to my interference problem.