As mentioned in the upcoming article ‘Applying Stealth Technology to EMC Chamber Designs’, and also mentioned during the recent EMC-LIVE webinar ‘Elephants in the TestRoom,’ the intention is to use 3D EM simulation software to explore possible design improvements to today’s under- performing chambers.

Sponsor
The article itself is not out yet, but we can make useful progress in the meantime by exploring the performance of the present ‘hot-wall’ arrangement. The hot-wall is the absorber clad wall behind the RF immunity calibration plane, and currently test labs are forced to point the antenna at a corner of the chamber to achieve test field compliance. Later on we will explore hot-wall wave-deflection (angled faces) as a possible design improvement.
Thanks are due to CST for the loan of their CST Studio Suite® 2014 Software, and particular thanks are due to Dr. Andreas Barchanski of CST for helping with the modelling and analysis.
IN THE BEGINNING
As with any engineering project, before any engineering time is invested, it pays to be sure of the required outcome, and have a direction of attack.
Well, the first objective is to establish why it is so difficult to obtain field uniformity at the calibration plane with the present hot-wall design, so I propose our direction of attack is to gather information on the performance of a standard flat absorber clad wall. I further propose we establish the individual performance of each type of absorber (pyramidal and ferrite tile).
GETTING STARTED
We will start with an analysis of the pyramidal absorber performance. As stated above, we first need to be clear on what we want the software to do and how we want it to do it.

Figure 1 shows a side view of a single pyramidal absorber. It is made from carbon loaded dissipative material shaped to form an impedance taper. We want to examine it’s two-way wave attenuation performance, so there is a fully reflective PEC (perfect electrical conductor) sheet covering the surface of the pyramid base. The pyramid is designed to face the wave it is intended to attenuate directly, so we will get the software to strike it with a plane wave at normal incidence and make a relative measurement of the ‘echo’.
A field probe positioned to the left of the pyramid will see both the incident and reflected waves, so I suggest we use a trick of the trade. In RF engineering, if you want to establish the loss (unwanted copper and dielectric loss) in say a four-way combiner, one approach is to manufacture two of them, connect them back-to-back (connect four connectors to the other four connectors), and  measure the overall loss. Half that loss and you have the loss of one combiner.
We can use a similar approach with the pyramid absorber by placing two of them back-to-back as shown in Figure 2. We then place one field probe on the left and one on the right and measure the fields in isolation. We lose the 180 degree phase change caused by the reflective sheet (we will need to remember this), but we gain data on the reduction of the magnitude of the ‘echo’ wave.

Figure 3 and Figure 4 show the same approach used for a non-normal angle of incidence. 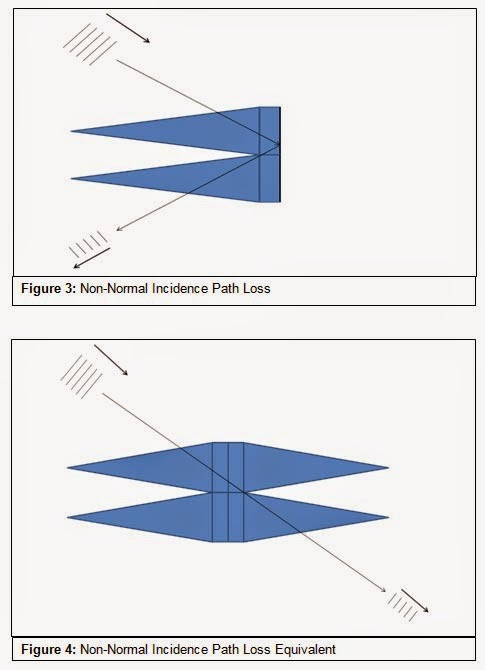 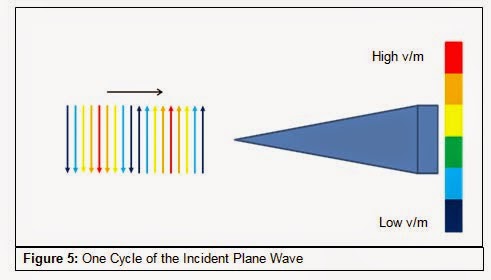 It is good practice to anticipate the results so you can use them in a sanity check later.
Figure 5 shows the plane wave about to strike the absorber. The vertically polarized RF waveform is represented by colored arrows showing the direction and strength of the field along one wavelength. Starting from the right and working left, the arrows show the upward pointing field of the first half-cycle gaining in strength to its peak (red), then falling in strength for the remainder of the half cycle, and then repeating this variation in strength for the downward pointing field of the second half-cycle. The upward pointing arrow on the right will impinge on the absorber first.

Figure 6 shows the anticipated results. For clarity only the effect on the peaks of the wave are shown. The right hand arrow in the pyramid represents the first half-cycle peak as it travels though the absorber. The center of the arrow has passed furthest through the pyramid lossy material and so that segment is attenuated the most (now green). Segments above and below the center have travelled different distances and so display different levels of attenuation. The left hand arrow has not travelled as far and only the center segment (orange) has dropped in field strength up to that point in the pyramid.
EARLY RESULTS
Well, the anticipated results went straight out the window because the actual results were a complete and utter surprise.
Figure 7 shows a still shot of the animated simulation results. When the animation is run, blocks of concentric field-rings march left to right in much the same way as the satellite view of a hurricane making its way West to East over the Gulf of Mexico.
It is mesmerizing to watch. Hopefully the EMC-Zone editorial staff can arrange for readers to witness the animation on-line.
They say there is nothing new under the sun and the effect may have been predicted/observed by some great scientist (Fresnel or another), but until we know what they are, and for the purposes of this EMC-Zone discussion alone, we will christen the blocks of concentric rings ‘Eddy Field Blocks’ (EFBs).
Even if turns they only occur over a comparatively narrow frequency band, or due to slowing of the wave (dielectric constant of pyramid material holding carbon in suspension not equal to 1), they are absolutely fascinating to observe. Anyone out there know a meteorologist or someone familiar with fluid dynamics that has seen these type of circular fields before? I know vortices form in fast moving rivers etc, but these seem quite different (no spiral swirl to the center). 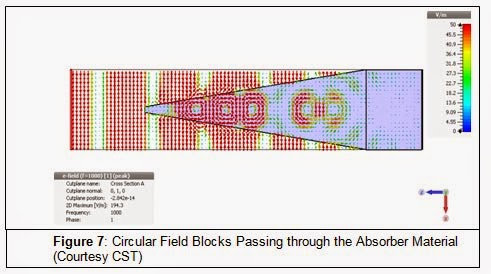 ROUGH DESCRIPTION
Initial observation suggests:-
An EFB begins to form inside and outside the material at the apex of the pyramid.
The EFBs are created at the apex every half-cycle of the incident wave, and dissipate at the base of the pyramid at the same rate.
EFBs are made up of concentric field rings, each ring pointing in the same direction, each ring remaining separate from the others within the eddy block.
Adjacent EFBs have field rings pointing in the opposite direction (clockwise or anti-clockwise).
The diameter of the EFBs is about ¼ wavelength of the incident wave.
The created EFB moves to the right and then pauses for the time it takes ¼ wavelength of the incident wave to pass. The EFB creation rate and dissipation rate are still the same (one every half cycle of the incident wave).
The EFB seems to be an entity in its own right, evidenced by continuing to exist while an incident wave minimum passes past it during the time the EFB pauses.
To be continued…………
-Tom Mullineaux

Presented by AH Systems - Engineers were not meant to be caged in cubicles or meeting rooms, engineers were meant to calculate. Their pencil … END_OF_DOCUMENT_TOKEN_TO_BE_REPLACED

Among the many antennas, probes, preamplifiers, etc. that we sell, the AK-40G Antenna Kit is arguably the most popular. In one convenient package, the … END_OF_DOCUMENT_TOKEN_TO_BE_REPLACED