Hurrah!! The 3D EM software has arrived and I have started to familiarize myself with it. I am going to enjoy this. Reading through the features, it is extremely powerful and looks perfectly suited to simulating the automotive test fixture. It always seems to take me about 40 hours at the keyboard to get up to speed with a new software package, so it will be a while. Meantime ….,
The Annual IEEE EMC Show – Why Dresden?
Last time we covered the vendors’ motives for attending a show, and made the claim that, despite the self-declared importance of the largest vendors, technical paper attendees rule when it comes to the survival of symposiums. Here is why: –
Shows come into existence when a small number of like-minded individuals (usually members of an engineering society) have a common interest in an emerging engineering discipline. Sooner or later it makes sense to meet up to share knowledge, often through the mechanism of technical presentations. This draws vendors like bees to a honey pot, and right from the start a ‘table-top’ sideshow becomes part of the event. As attendee numbers grow, so does the size of the sideshow. Exhibition hall fees soon make up a sizable part of the show revenue, which is why the largest of the EMC exhibitors see themselves as indispensable to a show’s survival. But when did you ever see even the largest vendor actually go out on a limb and pay for their own event on a scale equivalent to the annual IEEE EMC show? Why would anyone attend? It is like asking someone to subscribe to a technical journal with nothing but advertisements in it.
Vendors need to face facts, they are a sideshow, beholding to the symposium organizers; not the other way around.
The Presentation Attendee’s Tale
Given their importance, what draws a technical presentation attendee to a show?
Obviously, the papers/ workshops being presented. Now. unless they have a thousand dollars or two burning a hole in their pocket, these attendees are likely to be employer backed and likely be responsible for the EMC compliance of that company’s products. If newly appointed, an employer with an ounce of sense will want the new appointee ‘up to speed’ as quickly as possible. If the attendee is mid-level experienced, a worldly-wise employer will want that knowledge kept up to date. If highly experienced, the employer better keep that ‘hard to replace’ employee sweet should they wish to retain him/her.
Attendee Motivators
For the new guy, being responsible for product compatibility all of a sudden is disconcerting. Often due to an ad-hoc internal transfer or promotion, it is not uncommon for say a digital-electronics engineer to be saddled with the responsibility. The employer and new appointee both know they need to fill vast knowledge gaps quickly, either directly by way of attending ‘introductory’ technical presentations and workshops, or indirectly through making the acquaintance of experienced attendees at the show (so they can tap their brains later).
For the guy with mid-level EMC experience, keeping knowledge current is the chief motivator, and they will seek out and attend papers that update EMC personnel on standards changes, new technology, etc.
For the highly experienced guy, one pertinent topic can be enough to entice. They like to keep ahead of the curve with theoretical sessions, and during question time, can give vital input to leading-edge papers.
For both the mid and high level attendee, networking can be seen as important for job security
De-Motivators
Pressure at Work and No Travel Budget
Sadly, it is harder for staff to attend shows nowadays. Sometimes due to project pressures (everything seems to be project based these days), and sometimes due to increased pressure at work due to previous payroll cuts. It can be impossible for key staff to be ‘lost’ for a week, or even for a day. And in the rare situation where they can be spared, travel is often the first victim of budget cuts.
Regarding payroll cuts, I can state from first-hand observation that that the disappearance of support staff results in highly paid design engineers being reduced to busying themselves with jammed photocopiers, when they should be pressing ahead with the design of next year’s world leading product. Corporate madness prevails sometimes.
Types of Paper Delivered
Papers seem to range from the outlandish (university staff doing the ‘publish or die’ thing), to the same-old, same-old revamping of old topics. ‘Introduction to EMC’ type papers are always of use to a newbie, but to the more experienced engineers, I think perhaps the papers are less of a draw. Possibly as a result of the maturing of the industry.
To be continued………
Elephant in the Test Room #4 – The Zip Code Lottery
The room: Whether a manufacturer’s product passes the relevant emissions test can be a matter of where in the Country their premises are located
The culprit: The seemingly EMC industry wide acceptance that a 10dB variance in emissions measurements made on the self-same ‘golden’ emitter test-piece is OK
The consequence: This opens up the prospect of the unfair situation where one manufacturer’s design with comparatively superior emissions performance fails, while a second manufacturer’s design with inferior emissions performance (compared to the first) passes at another location
NOTE: Be sure to listen in on the EMC-LIVE webinar event  October 16 as this topic will be one of the roundtable discussions ( EMClive2014 ). This is sure to be fun because in truth I am simply a bystander with a pretty good understanding of the physics behind EMC tests, and the event is a chance for the experts on the panel to put me in my place. 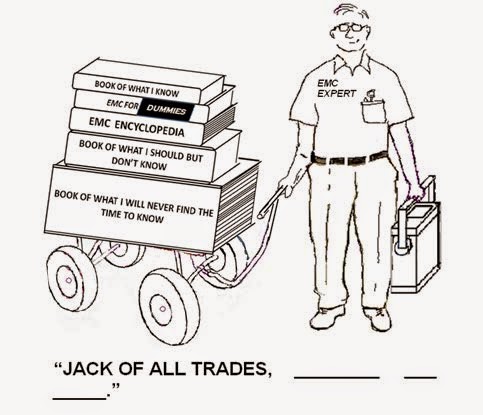 Continuing with the elephant at hand, in my view, the ‘root cause’ blame for its existence, and likely continuing existence, lies with the accepted design of open area test sites (OATS). The OATS test methodology involves the inclusion in the measurement of a deliberately created second field, routed via a deliberately created indirect path.
Here is the history of emissions testing as I see it. In the early days it made sense to build an open area test site (OATS) at a rural green-field site far from urban turmoil and its associated ambient RF noise. The trouble was it did not take long to realize that inter-site measurements varied enormously and there was no repeatability worthy of the name.
Figure 1 shows a key reason why these first failures of the method occurred. The figure depicts an unintentional path allowing a second field to be presented to the measurement antenna. The strength of this second field varied depending on the reflectivity of the substrate between the EUT and the antenna. Pavements and soil types at different sites would vary in reflectivity, and one site’s reflectivity could change depending on when it last rained. 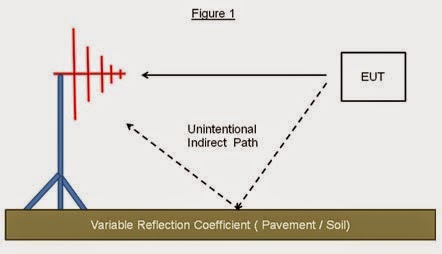 Therein lay the problem, and it was decided not to attenuate or divert the second field, but rather to make it consistent in strength (site to site) by installing a fully reflective ground plane as shown in Figure 2. 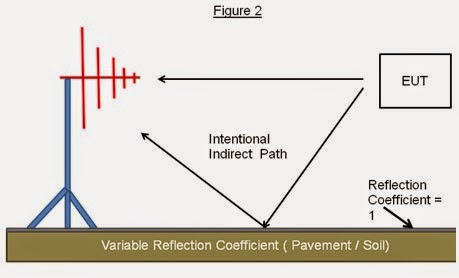 This presented a problem in that the maximum combined field might not occur in direct vertical alignment with the EUT. So to rectify this, a further decision was made to add complexity by searching the vertical space at the measurement plane.
Once accepted as a method, chamber manufacturers wishing to claim equivalence had to replicate the second path (simple and cheap) and also had to increase the chamber volume to allow for the 4m height scan (simple, but far from cheap).
I wonder if the founding fathers of EMC realized the ramifications this method would have later on in the design and cost of semi-anechoic chambers.
Question – Could they have come up with another solution? Easy for me to say since I wasn’t there to face their constraints, but I wonder if they gave serious consideration to diverting the second field away from the antenna as shown in Figure 3. 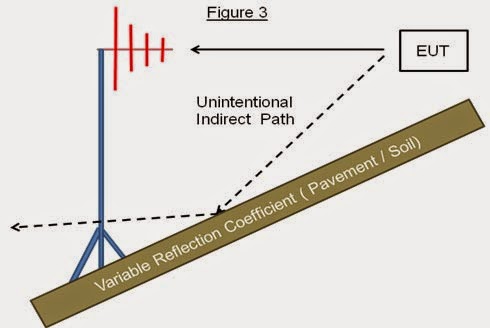 If you are going to search for a rural green-field site, why not choose one with a natural slope such as a hill? The hill slope might need to be graded to the best angle and access roads and unobtrusive scaffolding for the antenna mount would be an issue, but the impact on chamber designs would have been a lot kinder.
To be continued….
-Tom Mullineaux

Presented by Quell - Filter seals can be used to retrofit any connector with EMI and transient protection. Download this application note to learn … END_OF_DOCUMENT_TOKEN_TO_BE_REPLACED

Presented by AH Systems - Engineers were not meant to be caged in cubicles or meeting rooms, engineers were meant to calculate. Their pencil … END_OF_DOCUMENT_TOKEN_TO_BE_REPLACED