As we ride on the cusp of a new age of electronic warfare, management and use of the electromagnetic spectrum are becoming increasingly important.  In fact, the Department of Defense (DoD) has deemed the electromagnetic spectrum a critical resource and has established DoD Instruction 4650.01, which defines policy and procedures for administrating and employing this resource.

One of the key tenets of this document is the performance of a Spectrum Supportability Risk Assessment (SSRA).  The SSRA is becoming increasingly important as the spectrum becomes increasingly more congested, and industry practitioners should be cognizant of recent rule changes when developing new material requirements for new equipment and systems.  In addition to addressing the spectrum certification and frequency assignment processes, the SSRA is required for the procurement of all spectrum-dependent systems, including commercial-off-the-shelf (COTS) systems.

The purpose of the SSRA is to identify and assess regulatory, technical, and operational spectrum issues with the potential to affect the required operational performance of a candidate system.  For example, in addition to determining that a system’s bandwidth requirement complies with an individual nation’s frequency allocation scheme, a new or modified system must also be evaluated with respect to the following:

·  The system’s potential to cause interference to, or suffer from, other military and civilian radio frequency (RF) systems currently in use or planned for operational environments.

·  The effect of the system’s proposed spectrum use on the ability of the extant force structure to access the RF spectrum without interference.

·  How the system’s spectrum use conforms to the tables of frequency allocation of intended host nations, ensuring regulatory protection from other national co-band spectrum users.

· Whether or not individual host-nation frequency allocations include enough bandwidth to fully support the system’s operational mission—for example, the required data rate. 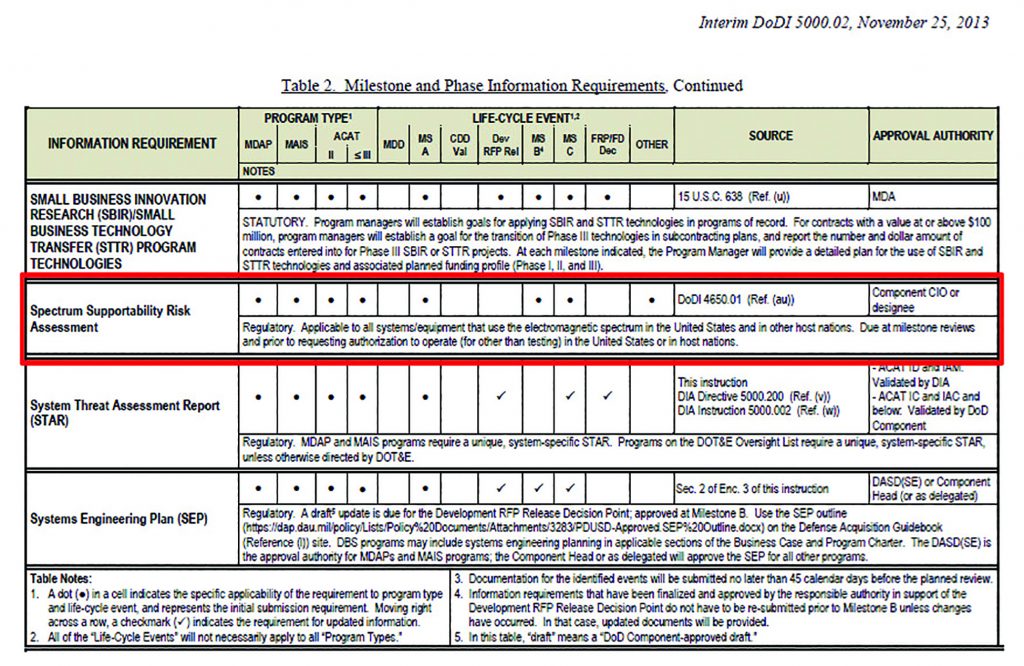 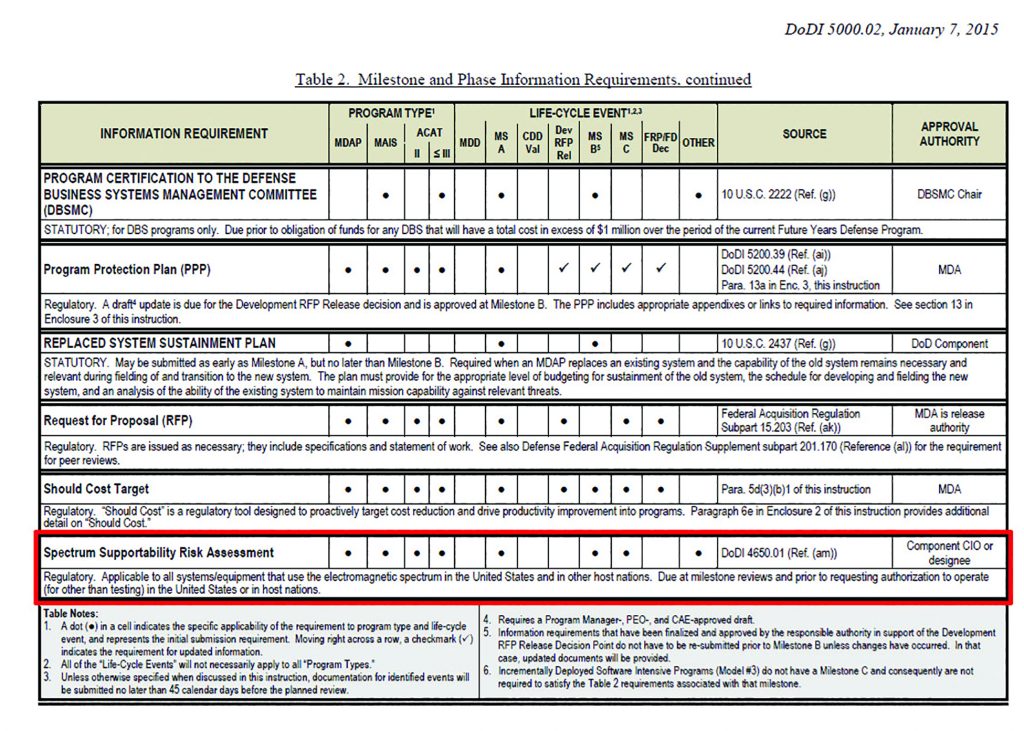 Assessing these topics of concern early in the design of equipment will save money in the long run.  SSRAs will be required of programs at milestone reviews A, B, and C as part of the overall balance of program success against future risks.  Figure 1 identifies a part of Table 2 in the DoDI 5000.02, Milestone and Phase Information Requirements, and it indicates that an SSRA must be developed early for any spectrum-dependent system program and that it must be updated at every major acquisition milestone.   A Program Manager’s (PM) failure to obtain spectrum supportability for components in its systems could have direct consequences to the program in meeting performance, schedule, and cost objectives established by its Acquisition Review Board and to the Combatant Commander in meeting Joint Mission Area requirements.

To better understand SSRAs, a little background is provided.  In the DoD acquisition process, spectrum management usually begins with equipment spectrum certification, a process whereby a system is approved to operate in a particular spectral band.  To actually operate the system, spectrum certification must be followed by obtaining a frequency assignment.

Obtaining frequencies to operate equipment in the United States is a two-step process, which is managed by the submittal of a properly filled out DD Form 1494.  The first step is Equipment Spectrum Certification.  The certification process assesses equipment transmit and receive characteristics to determine if the system complies with existing RF spectrum regulations.  The second step, Frequency Assignment, coordinates operational use of specific frequencies within specific bands among current users so that they do not interfere with each other.  The Manual of Regulations and Procedures for Radio Frequency Management, issued by the Department of Commerce’s National Telecommunications and Information Administration (NTIA), is the standard for both steps.  The NTIA is the regulatory authority over all Federal equipment and spectrum in the United States and Possessions (US&P).  The Federal Communications Commission (FCC) regulates non-Federal spectrum in the US&P.

It is important to remember that the SSRA is about assessing risk.  The Risk Management Guide (RMG) for DoD acquisition defines risk as a measure of the potential inability to achieve overall program objectives within defined cost, schedule, and performance/technical constraints; it has two components:  (1) the probability/likelihood of failing to achieve a particular outcome, and (2) the consequences/impacts of failing to achieve that outcome.

Accordingly, an SSRA should include the following components:

·   Regulatory Component:  Addressing the compliance of the RF system with U.S. national and international tables of frequency allocation as well as with regulatory agreements reached at the International Telecommunication Union.

·  Technical Component:  Quantifying the mutual interactions between a candidate system and other co-band, adjacent band, and harmonically related RF systems, including the identification of suggested methods to mitigate the effects of possible mutual interference.

·  Operational Component:  Identifying and quantifying the mutual interactions among the candidate system and other U.S. military RF systems in the operational environment and identifying suggested methods to mitigate for possible instances of interference.  The objective is to quantify any risk that systems won’t meet their performance requirements due to spectrum supportability issues.

Ideally, an initial SSRA is generated in the early stages of the DoD acquisition process.  Early identification of major regulatory and technical issues allows program office personnel to focus attention and resources on critical spectrum issues in the later acquisition phases.  The owner of the SSRA compiles input from several sources.  These sources include the following:

·  Technical and regulatory information obtained from DoD databases—specifically, the:

Spectrum Certification System (SCS) database, which is used to generate lists of co-band and adjacent band DoD emitters, providing an overview of other systems sharing expected electromagnetic environments.
Host Nation Spectrum Worldwide Database Online (HNSWDO) database, which is used to identify host nation comments on previous systems in the same frequency band and with similar technical parameters as the system being acquired.
U.S. and non-U.S. tables of allocation, which can be obtained in many cases directly from the internet.
· The latest pertinent Host Nation supportability comments are obtained by the Program Management Office (PMO) from the Combatant Command (COCOM) spectrum managers.  The COCOM spectrum managers will forward any resulting comments to the authors of the SSRA.

· The PMO defines the system’s technical parameters and intended operational deployment required for spectrum support (e.g., the frequency bands of interest and the intended worldwide development, test and operational areas, and host nations).

The major result of the SSRA may be that the PMO considers options such as changing the system’s spectrum use or other technical parameters or beginning consultations with the cognizant Spectrum Management Office (SMO) regarding possible courses of action.  Typical courses of action can include coordinating bilateral negotiations with individual host-nations or briefing the spectrum requirements of the system to groups such as the NATO Frequency Management Sub-Committee (FMSC), the DoD Spectrum Summit, or various COCOM spectrum conferences.  All PMO involvement with these groups must be closely coordinated with the cognizant service SMO and DoD representatives.

Spectrum supportability is not something that can be assumed; spectrum demands are increasing, and the amount of available spectrum is decreasing.  The requirement to perform and submit SSRAs is part of the DoD effort to ensure that the military does not continue to field systems with spectrum and/or interference problems.  From the list of items specified in DoDI 4650.01, one also must recognize that producing a meaningful SSRA is a significant engineering undertaking that must be thoughtfully planned and executed.  An understanding of the entire gamut of required information and the sources and availability of that information, as well as the technical ability to collate, analyze, and present the data, require specialized expertise.  And because the SSRA is a relatively new requirement, identifying knowledgeable and experienced help to produce and review an SSRA can prove to be challenging.  Accordingly, good sources for additional guidance in this area include the “Joint Services Guide for Development of a SSRA” (available at acc.dau.mil/library) [1] and the Services’ SMOs.

Finally, for those individuals tasked with spectrum supportability and related tasks and considerations, the following reminders are given:

· Considering spectrum supportability is a critical tenet for program success.

· Spectrum supportability resources should be applied early in a program life cycle and should be coordinated with the SMO.

A Solution to Enhance Reproducibility With Radiated RF Emission and Immunity Measurements?
Next Post »

How do you measure 5G?

10 inches narrower and 20 pounds lighter than a standard 4x60/100 amp filter panel, with no reduction in performance or quality. Designed for secure … END_OF_DOCUMENT_TOKEN_TO_BE_REPLACED

Presented by Quell - Transient connector inserts are a good way to solve ESD or other transient protection issues in a wide range of military-spec, … END_OF_DOCUMENT_TOKEN_TO_BE_REPLACED

Presented by AH Systems - The antenna is one of the least understood components in an EMC test instrumentation set-up, and a poor choice of antenna(s) … END_OF_DOCUMENT_TOKEN_TO_BE_REPLACED