This is post 2 of AR’s blog series “Specifying RF/Microwave Power Amplifiers for EMC Testing.” The full series can be viewed here.

Note: Pay close attention to an amplifier’s maximum input. It varies by vendor and possibly by model family. 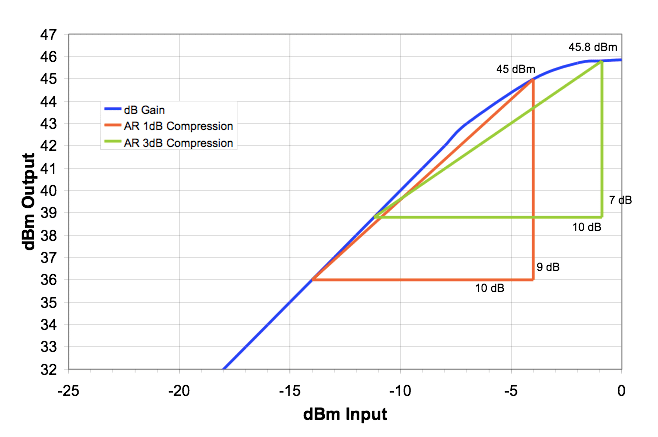 Distortion creates new unwanted signals at frequencies not present at the input of the amplifier, as observed in the frequency domain with a spectrum analyzer. Figure 7 shows the effect of driving a TWTA amplifier into saturation. This figure shows the harmonic having only a slightly lower amplitude compared to the fundamental signal. This situation causes unnecessary problems for the test engineer. Under this scenario, if the EUT fails during radiated immunity testing, the test engineer will not know if the cause of the failure were due to the fundamental or the harmonic. To further complicate matters, if additional harmonics have high amplitudes the test engineer must evaluate all harmonics to determine the cause of the failure. It is also possible that neither the fundamental or a single harmonic causes a failure, but a combination of the fundamental and harmonic(s). Measuring the amplifier output power or the generated field are further complicated since most commonly used power meters and field probes are themselves wideband measurement devices and will display the total energy across the entire band, fundamental, harmonics, and spurious. It should be noted that AR’s solid-state Class A amplifiers produce far less harmonics than TWTAs, they are rated for -20 dBc at the 1 dB compression point. This greatly reduces the EUT’s exposure to unwanted RF energy during radiated and conducted susceptibility testing. 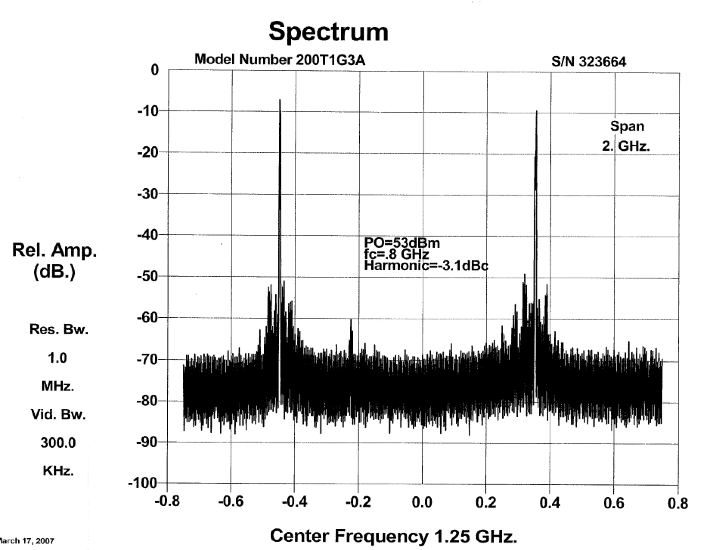 Figure 7: Image of the Fundamental Signal and harmonic

In general EMC amplifiers range in type, such as: Solid State, TWTA, CW, Pulse, and their class of operation – Class A and Class AB.

Class A and Class AB amplifiers have their strengths and weaknesses. Class A amplifiers are the most robust. They provide the highest levels of mismatch tolerance which is needed when significant RF levels reflect into the amplifier. This is a common effect with many EMC antennas and other transducers. Additionally, linearity and harmonic distortion are much better with Class A amplifiers compared to other amplifier classes.

Class AB amplifiers have their own benefits. Generally, the cost of the amplifier is less than Class A amplifiers. The physical size of these amplifiers is also generally smaller. These amplifiers are much better suited for use with matched loads. See Application Note 27A.

Shown in Table 2 is a summary of the differences between Class A, and Class AB amplifiers.

A summary of mismatch performance for typical Class A and AB amplifiers is shown in Figure 8. The 100 Watt curve is representative of most AR amplifiers below 500 watts. It is clearly seen that the amplifier delivers a Minimum Available Power (MAP) of 100 watts irrespective of the load VSWR, including output load opens and shorts. As output power increases it becomes increasingly difficult to absorb 100% of the reflected power uniformly. Hot spots at these elevated power levels can cause damage or at least affect reliability. Nevertheless, AR high-power amplifiers continue to offer 100% mismatch tolerance up to a load VSWR of 6:1 (lower-power amplifiers deliver full power regardless of mismatch). Once this level is reached, the output power is limited to 50% of rated power.  For example, the AR model 2500A225A amplifier will provide a MAP of 2500W up to a load VSWR of 6:1. At this point, approximately 1250 watts is reflected. From this point on, as load VSWR increases the output power is gradually reduced until it reaches 1250 watts for an infinite load VSWR.

In practice, the AR’s conservative VSWR compromise of 6:1 works well in that the VSWR of EMC antennas and transducers is often held to this value or better.  If it strays beyond, rest assured your AR amplifier has sensed the increase and has implemented sufficient limiting to protect the amplifier from any damage. Based on the above, mismatch tolerance can make the difference between meeting or failing the required power or field levels. As a result, mismatch tolerance is an important specification to consider when comparing offerings from different manufacturers, and where some manufacturers with use terms such as typical, or protection to confuse the issue. 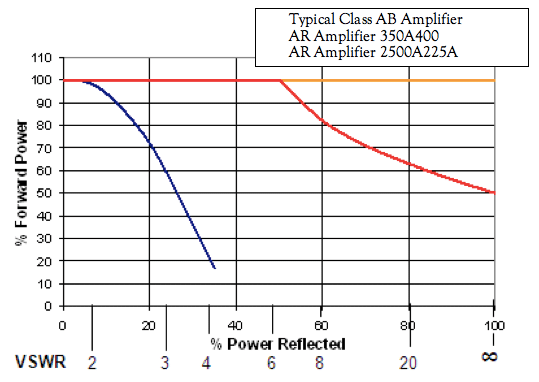 For years, when discussing microwave, high field-strength electromagnetic compatibility (EMC) radiated susceptibility testing, Traveling Wave Tube Amplifiers (TWTAs) were the only choice for wide frequency coverage, and power. TWTAs are lower cost solutions, in most cases, but do have drawbacks. Their unique properties allow them to be used in a pulsed mode, that can lower the total required average power, but maximize their peak power and thus reducing the cost further. However, TWTAs produce high harmonics, have a greater noise floor, longer purchase lead times, longer repair times, and lower reliability than solid-state amplifiers. Some advanced TWTAs combine multiple tubes together to reduce harmonic content and increase total power. Another solution to reduce harmonics is to use filters on the amplifier output. It’s important to remember that there are always losses associated with filters that must be considered for amplifier power sizing. The VSWR associated with the filters is another consideration, which can cause amplifier foldback.

While on the surface the system seems simplified, a closer look within the “box” reveals a different story. While the two amplifier modules in a dual-band amplifier may share a common power supply, the overall system is complicated by the fact that it now consists of not one, but two complex amplifier modules.

Furthermore, additional RF switching, cabling, and connectors are required which will adversely affect the RF output of both amplifiers. The additional components add insertion loss that may not present a problem at lower frequencies but can account for significant losses at higher frequencies. Also, simultaneous signal generation across the entire band is not possible, due to the required switching from one frequency band to the other. So, as you can see there are pros and cons to dual-band amplifiers.

Figure 10 and Figure 11 show the schematic differences between a single band and dual band amplifier, respectively. 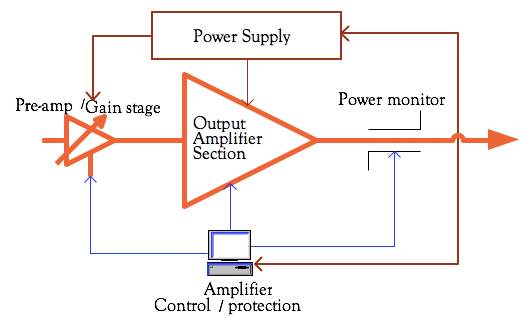 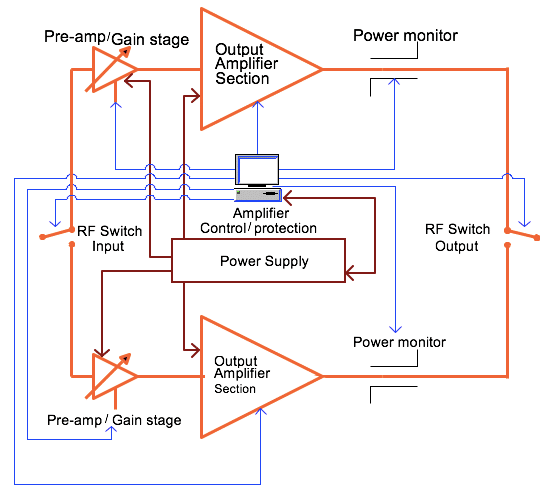 An often-overlooked important part of an EMC test setup are the accessories. The cost and time associated with EMC testing warrants the use of high-quality accessories. 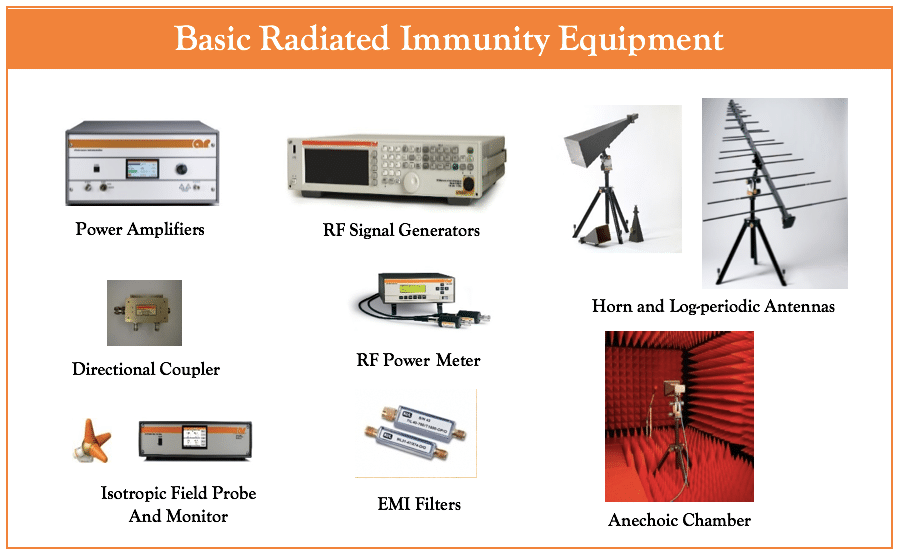 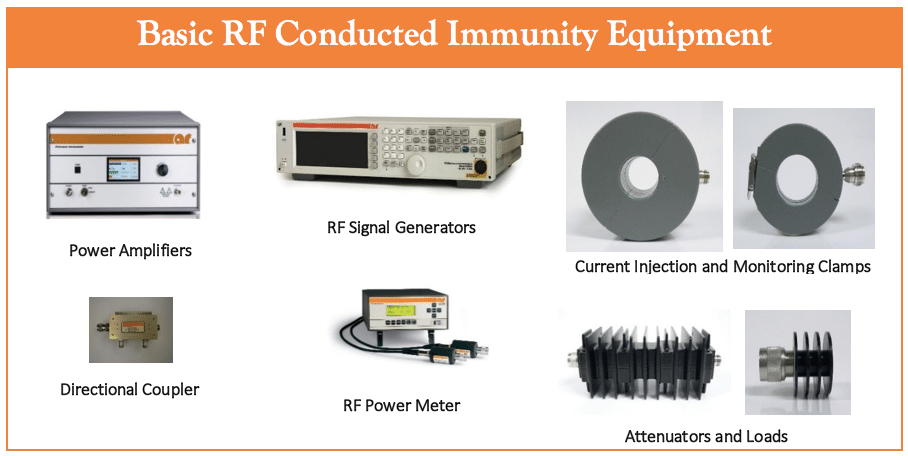 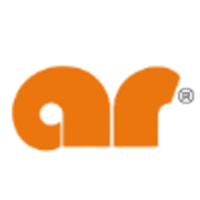 Cost-Effectively Ensure Electromagnetic Compatibility in the Age of IoT

10 inches narrower and 20 pounds lighter than a standard 4x60/100 amp filter panel, with no reduction in performance or quality. Designed for secure … END_OF_DOCUMENT_TOKEN_TO_BE_REPLACED