In this article, I am delving into the evolvement of CS116 testing, the background, the purpose and how the testing is approached today. The test title is, “Conducted Susceptibility, Damped Sinusoidal Transients, Cables and Power Leads”. MIL-STD-461 assigns applicability to a broad variety of applications and states the purpose is to verify the ability of the EUT to withstand damped sinusoidal transients (Figure 1) coupled onto EUT associated cables and power leads.

Looking back, we find that testing for this risk was introduced August 4, 1986, via the MIL-STD-462 Notice 5 release, adding test methods CS10 (pin injection) and CS11 (capacitive or inductive indirect). A short time later (15 October 1987) MIL-STD-462 Notice 6, supplemented by adding CS12 (a current pulse injection method) and CS13 (a single wire coupled pulse). Recall that back in those days MIL-STD-461 established applicability and limits and MIL-STD-462 provided the test method (how to accomplish) so both documents evolved together. These early day documents were very practical without much in the way of explaining the reasons behind the test (the “why” back-story), so we just did it (the testing) as specified.

Major changes in the MIL-STD-461/462 testing standards were in the works and only six short years later revision “D” of MIL-STD-461 and MIL-STD-462 were issued. Dealing with the most recent change notices (CS10, CS11, CS12, CS13) was not the only update for revision “D”, but those four test methods became CS116 incorporating the means to replace the four prior tests. Beginning with the revision “D” release, the standard included appendices, which used some rationale and lessons learned that have been a tremendous help in explaining the test. This section regarding CS116 provided such information and identification on sources that produced the interference.

I want to take a moment here to discuss a few points associated with CS116 that have been somewhat omitted during testing that could affect the testing standardization. Included here are points that have changed as we have moved forward with revisions to the current “G”, which included some CS116 changes. To summarize:

c. First waveform cycle may be positive or negative going.

d. Position monitor probe 5 cm from connector backshell unless connector and backshell exceed 5 cm then position as close as possible.

e. After calibrations and resonant characterization, slowly increase to test current or calibration limit and monitor EUT performance. Test at all frequencies with EUT powered on and powered off.

a. At a minimum, compliance shall be demonstrated at 0.01, 0.1,1, 10, 30, 100 MHz. (This change meant that loop characterization was eliminated along with the associated resonant test which produced a worst-case maximum current or maximum voltage. If other frequencies were known to be critical, then those may be added to the testing.  The basis for eliminating other frequencies was that testing had not identified susceptibility that were not also identified at one of the six fixed test frequencies.

b. Although not stated in the revision, we also need to consider that resonant frequency testing is difficult to match an installation. The cable arrangement significantly impacts resonance points because of the parasitic effects of the layout.  This means that a resonant test in the laboratory is likely not to support a similar effect as installed unless the installation arrangement can be duplicated.

a. Apply the calibrated test signals to each cable or power lead of the EUT sequentially. Reduce the signal, if necessary, to produce the required current. This changed from “increase slowly” to “apply maximum” at first.  But this could lead to over-test damage. If you think that impedance could be low, then increasing gradually can be used.  I think any circuit could have a low characteristic impedance until proven otherwise.

b. Power off test mode was eliminated.

Revision G (changes) – not significant in a manner affecting this discussion.

Okay, we have established the background and evolution for this test method. During the standards review for this, I noticed that “withstand” was sometimes included when defining the test purpose. In other places in the standards, susceptibility was used. In many cases, susceptibility is associated with a transient event and it may be acceptable to allow some indication or disruption if a return to normal operation was achieved – a “withstand” allowance. In your case, “withstand” may be permitted as acceptable, subject to agreement with procuring agency.

Since the beginning, the overall procedure has evolved as discussed (many details were not included above). So, let’s recap the current process – after all this discussion is about the testing.

Calibration for CS116 has multiple aspects including all the details associated with waveform parameters and the additional target of establishing the drive level to produce the test current via the calibration fixture.

The calibration configuration (Figure 1) supports generation of the waveform in an optimum manner to demonstrate compliance to the standard. Once operating, adjust the generator output to the test current measured on the oscilloscope (don’t forget the various correction and conversion factors). Record the generator output amplitude as the maximum drive to be applied during test. With the waveform amplitude established, verify the other waveform parameters (frequency and dampening factor).  If the waveform is not within specification, take corrective action and redo the calibration. Repeat the calibration procedure for each test frequency.

Part of the calibration is to assess the “Q” or the dampening factor. MIL-STD-461 requires a Q of 15 ±5 as calculated by the formula in Figure 2. The peak current at the 50% cycle is not 50% or peak current – it is the peak current of the cycle nearest the 50% current point. In the figure, N = 5. 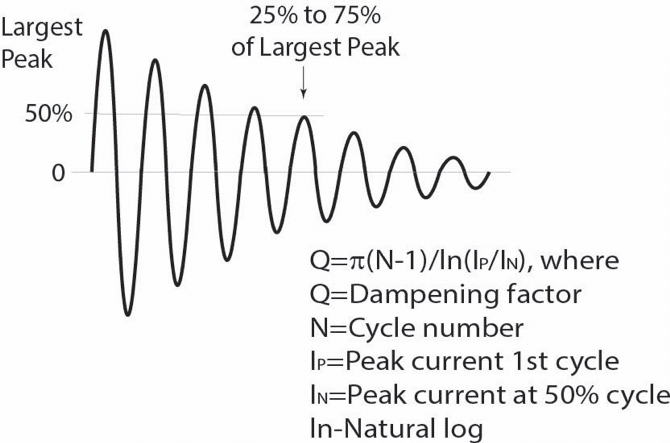 Pay attention to the power and frequencies involved with this test, for example, the coaxial load can see peak power of 5 kW, so select a component with adequate ratings. A 10 W continuous power terminator can often support the peak 5 kW, but check. Be sure to protect the input of the oscilloscope, if necessary. 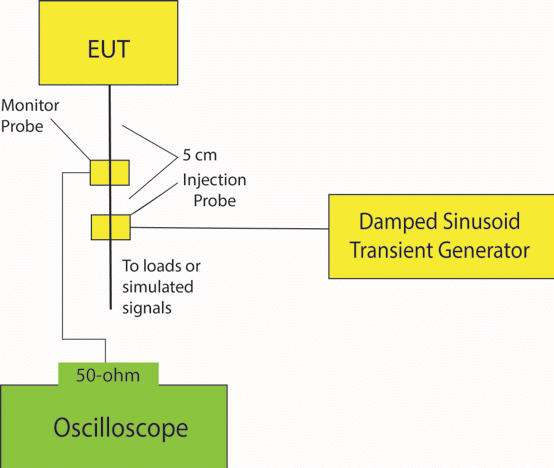 The testing part follows now that the calibration is complete. Configure the Equipment Under Test (EUT) (Figure 3) into the operational mode for testing using the same CS116 test equipment used for calibration plus the additional items. Locate the probes at the 5 cm spacing. Locate the monitor probe closer if EUT connector/backshell is 5 cm).

Once the EUT is operating correctly, increase the transient generator amplitude until the test current is flowing but don’t exceed the calibration drive level for that test frequency.

Once the current is attained allow the transient to be applied for five minutes at a repetition rate of 1-2 seconds. Note that the waveform during test may not show dampening characteristics of the calibrated wave because the cable parameters can distort the signal. Once the test is accomplished for all test frequencies and cables the test phase is complete. Please remember to capture waveform recordings and measurements of the applied current.

As with all MIL-STD-461 tests, planning is an essential element and planning includes defining the hardware necessary to accomplish the testing. Make sure you are aware of reporting requirements, so you will capture the necessary information during the test.

I find it very convenient to use a spreadsheet for data reduction. Even for the calibration, pre-calculating the target speeds the process and minimizes the math errors once the sheet is validated. A copy of the spreadsheet is part of the student materials of the CS116 webinar training.

Hopefully, I’ve added a bit to your knowledge about CS116 where a transient from various sources can excite a circuit and demonstrate sinusoidal wave ringing as induced energy that the circuit must dissipate.

Contact me with questions relative to this review or any other subject matter related to EMC, Electrical Safety or Environmental testing or designing for compliance. 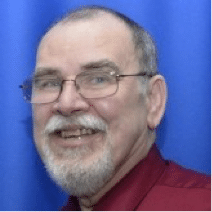 Presented by Quell - Filter seals can be used to retrofit any connector with EMI and transient protection. Download this application note to learn … END_OF_DOCUMENT_TOKEN_TO_BE_REPLACED