This article provides an introduction to the recently published Radio Equipment Directive (RED). It looks briefly at the history of the requirements, the changes in the product and regulatory landscape and looks at what it means to equipment manufacturers.

The current Radio and Telecommunications Terminal Equipment (R&TTE) Directive, 1999/5/EC entered into force over fourteen years ago on the 7th April 2000.

Before this “Telecommunications Terminal Equipment,” or TTE, had been covered by earlier Directive 98/12/EC which co-ordinated the requirements of the original 91/263/EEC and 93/97/EEC Directives. Radio equipment on the other hand was covered by a fragmented and non-aligned set of national approvals requirements.

The R&TTE Directive simplified the process and allowed manufacturers of radio equipment to place product on the Single European Market after demonstrating compliance with all Essential Requirements of EMC, Safety and Radio Spectrum Use.

Whilst the number of different radio devices placed on the Single European Market since 2000 has not been directly tracked, the number could be considered to be similar to that placed on the US market which is tracked by the FCCi. This shows a near five-fold increase from 3000 in 1999 to nearly 15000 in 2012 and still growing at 12% p.a.

A number of issues that have arisen with the proliferation of radio devices have been addressed through updates to standards, but increased concerns over non-compliant products and other requirements from the “New Legislative Framework” (NLF) required the R&TTE Directive to be revised.

Initial activity began back in 2007. Due to increasing concern regarding non-compliant equipment being placed on the market, a number of Market Surveillance Authorities (MSAs) were pushing for the implementation of a mandatory registration system of all equipment. This caused a great deal of discussion and contributed to the long gestation period.

Registration databases are common in other countries, such as USA and Canada, but they have one body responsible to one economic area – who would (be trusted to) run an EU wide scheme? Furthermore management of the data is non-trivial; the FCC database was 660 GB in 2009, and probably double that now.

The European Commission (EC) sent initial proposal to European Parliament in 2012. A second, non-sequential, draft was created before a final “compromise” text was created in 2014.

This text was adopted at its first reading by the European Parliament on 13th March, by the EU council on 14th April and published as Directive 2014/53/EU on 22nd May 2014.

Whilst there are many similarities between the R&TTE Directive and RED, there are a number of differences, which are discussed further below. One of the differences is the removal of TTE, hence the shortened name “Radio Equipment Directive”.

The European Commission sees four main objectives in the development of the RED:

Note: ‘economic operators’ is a term from the NLF, and means manufacturers, authorised representatives, importers and distributors – everyone in a product’s supply chain.

The RED no longer applies to TTE, such as wired telephones, fax machines and ADSL modems which will now be covered by the EMC and LV Directives.

The scope of the RED has been widened to include:

Note: The Low voltage Directive exempts devices that operate below 50 V AC rms or 75 V DC, but there is no such “low voltage level” exclusion in the R&TTE or RED.

Some new requirements of note:

Note: interworking is the ability of two or more items to be able to connect, communicate or exchange data, i.e. to be able to work with each other.

It should be noted that a number of Article 3.3’s requirements were in the R&TTE Directive, but there are only a handful of Harmonised Standards prescribing requirements and these are mostly for radios used to support safety of life at sea. Article 3.3 requirements are brought into being by the Commission though a “Delegated Act” in accordance with Article 44.

If one read the press release that accompanied the R&TTE Directiveiii one might think that common chargers were the most important part of the Directive, but they are only a part.

It’s not currently clear what actual requirements will develop from these clauses in article 3.3 and they must first be made mandatory by a Delegated Act (a type of EC legal instrument discussed below).

Considering briefly what requirements there may be for the Common Charger, the actual requirements would be contained in a standard, but Industry and The Commission have already done an amount of work on this already, see http://ec.europa.eu/enterprise/sectors/rtte/chargers/index_en.htm, which may well be followed by those writing any future standard.

Additional requirements due to NLF and market surveillance

The NLF, comprising EU Decision 768/20080/EC and Regulation 765/2008/EC, came into force in 2010 to provide assistance with dealing with non-compliant products and to try and level the playing field for manufacturers of compliant products.

The requirements on all economic operators in the supply chain are those set out in Decision 768/2008/EC and are similar to those in the revised 2014 versions of the Low Voltage and EMC Directives. These are discussed in more detail in Articles 10 thru 13 of the RED.

The RED takes things a step further in Article 5 which contains a provision to require a registration scheme for products deemed to have a low level of compliance. It’s worth noting that the some countries voted against the inclusion of a registration scheme and no such scheme is currently being implemented – but that does not mean that there won’t be one at some point in the future.

Now defining, and determining, “low levels of compliance” could make a magazine article all of its own, as this covers a wide range of issues from otherwise compliant products having CE marks that are 0.25 mm too small through jammers which are illegal and non-compliant on multiple fronts.

The conformity assessment process is revised under the RED: 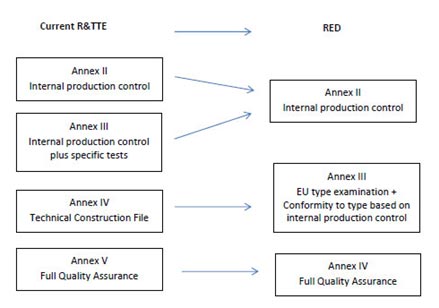 There’s quite a lot to be done by member states, the EC and the relevant standards bodies, but little to be done at the moment for manufacturers of radio products currently under the R&TTE Directive. All products placed on the market before 12 June 2016 can continue to use the R&TTE until 2017 so, for many, consideration of compliance with the RED is unlikely to be required until 2016.

Notified Bodies need to be created for the RED. Discussions as to how this will be done are ongoing but one suggestion is that all existing NBs should be transferred “en masse” on a single date and then their competence against RED checked afterwards. This is to prevent market distortion and unfair advantage that could arise should NB changeover occur piecemeal. It should also be noted that whilst an NB can prepare an EU Type Examination Certificate before the RED comes into force, it cannot sign and issue it before 13 June 2016.

The RED also imposes additional requirements on information to be provided to the user such as labels and instructions, but it’s worth waiting to see whether more detailed guidance is provided in these areas before working on them.

Note: Delegated and Implementing Acts are the names given to two types of instrument the European Commission may adopt in order to ensure the implementation of EU law and are defined in the Lisbon Treaty. In summary:

I don’t wish to delve further into the legal subtleties, but would summarise by saying that none of these requirements are currently envisaged to be required when the RED enters into force, but may well become requirements in the future (subject to the required legislation coming into force).

A certain amount of Standards development work is required by ETSI and CENELEC, though some of it is dependent on which Acts come into being.

Work on standards for the first two of these items has started, but no draft standards have yet been produced. Manufacturers of Sound and TV receivers need to be aware that their products will be covered by the scope of the RED and will need to comply with new Radio Spectrum requirements, and possibly with safety requirements too. In the absence of a new product specific Spectrum standard, which is likely to be developed, the standard that would most likely apply is ETSI EN 300 220-2 V2.4.1, which contains requirements for Receiver Spurious Emissions and Receiver Blocking.

Work on Article 3(3) standards will not start until the required legislation is in place, but it’s currently thought that these parts of article 3(3) are likely to be addressed before others.

Timescales and thing to monitor 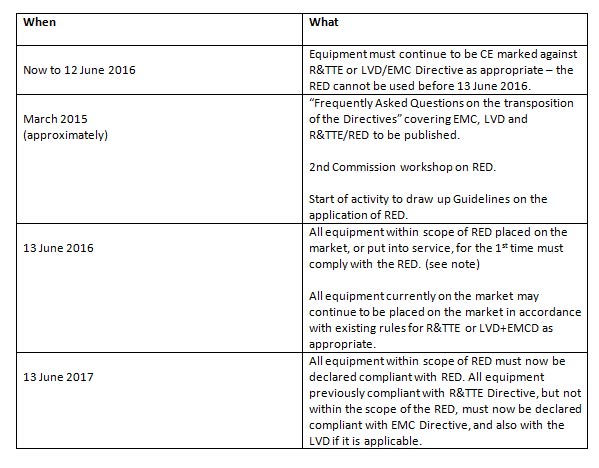 Note: The transition period, from 13 June 2016 to 13 June 2017, is designed to be applied to products that were on the market before the RED came into force. However, a manufacturer may use previous legislation, such as R&TTE Directive, for new products, but would have to perform a re-assessment to RED by 13 June 2017, and update all documentation, which would be cumbersome.

It’s worth noting that you cannot declare compliance with both the R&TTE and RED on the same Declaration of Conformity (DoC), so there is going to be a certain amount of administrative work required during 2016-17 in updating DoCs and providing additional information in user manuals.

Sulis Consultants is an independent CE marking and Product Approvals consultancy based in Hampshire, England and specialising in helping manufacturers comply with the requirements of R&TTE, EMC, LV and RoHS Directives as well as radio certification for North America.

Charlie Blackham is a Chartered Engineer who has been working in the field of product approvals and CE marking for over 20 years. After working for several manufacturers as Approvals Manager, Charlie set up Sulis Consultants in 2005 to offer advice and assistance to a wide range of clients. A former Notified Body technical expert, Charlie has helped clients CE mark a wide range of radio products operating from 1 MHz to 78 GHz and can be contacted on [email protected] or via www.sulisconsultants.com

Sponsored by Schurter SCHURTER’s innovative FMAD CEE and FMAB CEE connectors, according to IEC 60309, feature a first of its kind integrated line … END_OF_DOCUMENT_TOKEN_TO_BE_REPLACED

Among the many antennas, probes, preamplifiers, etc. that we sell, the AK-40G Antenna Kit is arguably the most popular. In one convenient package, the … END_OF_DOCUMENT_TOKEN_TO_BE_REPLACED