Many (perhaps all) of EMC standards that are listed under the EMC Directive, that set limits for mains harmonic emissions, have exclusions (‘let-outs’) for certain types of equipment, especially: (these examples are from IEC/EN 61000-3-2 Ed.5:2018)

These exclusions may exist because such products used to be relatively rare and there is reluctance to start applying harmonic limits to them and increase their size and cost. They may also exist because of lobbying by certain companies or trade organizations for their own commercial gain, or for negative effects on competitors.

A problem with exclusions is that some manufacturers might game the system, for example by rating a professional product at a little over 1kW although their customers’ loads are under 1kW.

Why is this a problem? Almost every product these days uses electronic power converters that – unless suppressed – emit copious levels of harmonics into their mains supplies. In some office-type buildings the majority of the harmonic loading on the three-phase supply now comes from plug-in chargers that each consume less than 75W that do nothing to suppress their harmonic current emissions because the standard allows them to.

Such exclusions can lead to a “tragedy of the commons” where the low-voltage mains power distribution in a building or on a site suffers actual harm from uncaring/uncontrolled emissions of harmonics, to the point where it is causing financial and even possibly fire-safety risks for everyone who uses it. 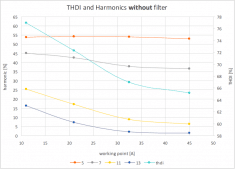 Even where all the equipment’s harmonic emissions are in line with the limits, I have twice seen them add up to the point where they prevented road tunnel lighting schemes from being operated at full power, leading to large claims against subcontractors.

Build-up of harmonic currents is especially problematical because the electronics industry can now saturate the entire world with a new type of product within a couple of years, but IEC standards are reactive, taking at least five years to respond to observations of real-life problems – and then taking another 18 months to two years to finally replace their earlier version in the Official Journal of the EU.

Many designers and manufacturers of traditionally non-electronic products are unaware of the very real problems associated with mains harmonics. For example, manufacturers of products based on electrical motors driving pumps, fans, conveyor belts, etc., are increasingly using variable-speed motor drives to improve the functionality of their products whilst reducing their power consumption and overall cost of ownership.

In the UK, industrial and commercial sites buy their electrical power from a NOC (Network Operating Company), and part of these legal contracts is that they accept limitations on the harmonic emissions they export to the MV or HV power grids. These limitations are called G54-1 and you can read about them at http://envirostart.com/documents/G54-1.pdf.

Because of the great increase in the use of variable speed motor drives and other electronic loads over the last three decades, many sites are now running on the ragged edge of being financially penalized, or even shut down, by their NOCs, because of harmonics.

Also, because many sites use legacy wiring systems which are running rather too hot and at risk of failure due to the harmonic currents caused by the aggregate harmonic currents from all of their new motor drives and other electronic loads.

I have had to deal with one such situation where adding just one small item of equipment caused a generating plant to shut down, losing over a quarter of a million Pounds per day for the several weeks it took to fix the problem.

And it is not uncommon for electrical engineers faced with mains fuses that keep opening, to clip on their ammeters and find the current is less than the fuse rating, so they think the fuse shouldn’t be opening. Not understanding why this is happening, they fit a larger fuse and burn the wiring out, or the HV mains transformer. If they are lucky, they don’t burn the building down too!

This generally occurs because most electricians are equipped with low-cost meters that aren’t ‘True RMS’, so don’t measure harmonics correctly. They can measure the RMS current as being up to 30% lower than it really is!  (Fuses, of course, measure RMS current 100% correctly.)

I always recommend that anyone who is integrating systems or building installations make compliance with harmonic emissions specifications part of their purchasing contracts with equipment suppliers, rather than simply (and incorrectly!) assuming that if the equipment is CE marked and has a Declaration of EU Conformity to the EMC Directive (2014/30/EU) – its harmonic emissions must therefore be acceptable.

(Ditto for Declarations of EU Conformity  to the Radio Equipment Directive (2014/53/EU) which replicates the EMC Directive’s requirements.)

Supplying products without limiting their harmonic current emissions is, in my professional opinion, a very risky thing to do even if they are fully compliant with the relevant harmonics standards.  In such situations I strongly recommend that at least they take legal advice on the wording of their User Manuals and sales contracts, to warn their customers whilst also attempting to limit their liability if their products should prove to be the ‘last straw’ for a customer’s installation.

And even where harmonic standards have strict limits, there are companies in the UK who knowingly sell products which fail those limits by large amounts because enforcement officers in the UK don’t seem able or willing to enforce the EMC Regulations.

These companies probably think they are being very clever by reducing their costs of manufacture and stealing market share from those who take their responsibilities seriously – but they don’t realise the huge financial risks they are running for themselves, and the huge financial and fire-safety risks to which they are exposing their customers and third-parties.

Even a single case like this can completely ruin a company, and/or personally bankrupt its Directors. I have been an Expert Witness in technology-related cases like these, so I know what I am talking about.

Many company directors are probably not fully aware of the hugely damaging possibilities of mains harmonics. If they think of them at all, they probably think they are just big fuss about nothing, like so many people seem to think applies to anything EMC. So, I am bringing them to your attention, hoping that you will in turn bring it to theirs.

Many company directors also are probably not aware that all EU Directives now require products to have documented risk assessments, rather than simply comply with the relevant harmonised test standards. If a site burns down, or is closed down, or otherwise loses very costly production, and harmonic currents are the cause – lawyers will read those risk assessment documents very carefully indeed before they decide who to attack.

On the other side of the coin, being able to offer equipment or systems with low harmonic current emissions – even where not necessary for compliance with the relevant standards – could create marketing and sales benefits. Something for the sales and marketing guys to get their teeth into!

Keith graduated from Imperial College, London, in 1972 with an Honours Degree in Electrical Engineering. He has been a member of the IEE/IET since 1977 and a member of the IEEE since 1997. Appointed IET Fellow and IEEE Senior Member in 2010. After working as an electronic designer, then as project manager and design department manager, Keith started Cherry Clough Consultants in 1990 to help companies reduce financial risks and project timescales through the use of proven good EMC engineering practices. Over the last 27 years, Keith has provided design consultancy and training courses to over 800 customers worldwide, presented many papers and published many articles and three books, all on good EMC engineering techniques and on EMC for Functional Safety. He chaired the IET’s Working Group on EMC and Functional Safety since 1997, and is the UK’s appointed expert to the IEC committees on 61000-1-2 (the basic standard on EMC for Functional Safety), 60601-1-2 (risk management of EMC for medical devices), and 61000-6-7 (generic standard on EMC for Functional Safety). He may be contacted at [email protected].

Sponsored by Schurter SCHURTER’s innovative FMAD CEE and FMAB CEE connectors, according to IEC 60309, feature a first of its kind integrated line … END_OF_DOCUMENT_TOKEN_TO_BE_REPLACED