Recap on this Thread

The consequence: Equipments purportedly demonstrated to be resilient to 200v/m have in many instances been exposed to only around half this field strength, the rest of the test field created by an unintended frequency.

Hello again readers. We are still looking at using a mix of filters and band-overlap as a way of fixing the compromised test field, but before continuing, let me keep my promise to expand on the test house ‘get around’ alluded to by an EMC Zone reader.

“Hi Tom, This is why some amp manufacturers are looking towards solid state, with the decreasing cost of solid state devices it’s getting such that there is very little difference between the two technologies. There is actually a way around this problem. We have advised that it is always possible to conduct your sweep from HF down to LF, TWT’s have very little radiation outside their operating bandwidth so the potential for misleading harmonic interference goes away.

You do always have the potential problem in 2 signal mixing products within the EUT but that’s a different story!”

Here is the situation faced by the test house that the suggestion addresses:

When subjecting an EUT to two test fields at once (the elephant), if the EUT malfunctions, did it do so because is it susceptible to the first field or the second?

For ease of explanation, let’s assume a 1-2GHz TWT amplifier providing an intentional test signal at 1GHz. This is at the start of the band so there will also be a substantial signal at 2GHz as shown in Figure 1. The marked 2GHz signal creates the unwanted second field.

The ‘get around’ suggests that if an EUT failure takes place, the test engineer should apply an intentional test signal at 2GHz and see if the EUT still fails. The thinking here is that harmonics created by wanted signals at the top of the TWT amplifier band are relatively small as shown in Figure 2. If the EUT still fails then it is susceptible to 2GHz at that field strength.

In fact, as the reader suggests, the test could be run backwards from the very beginning, that is start at the uppermost frequency in the relevant test band, and step down to the lowest.

Can anyone see the ‘hole’ in this solution?
To be continued …………………..
Right – Lets get back to exploring the use of filters and band overlap combined: 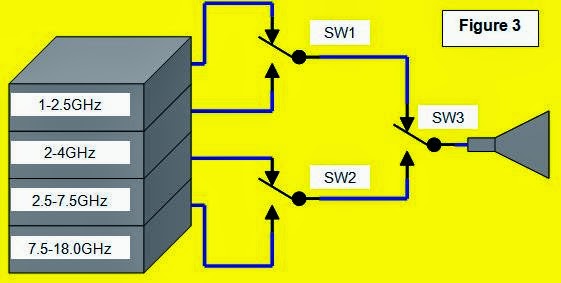 The introduction of the 2-4GHz amplifier creates a band overlap such that the harmonic issue at the start of the 2.5-7.5GHz amplifier band is alleviated.
That is the software uses the 2-4GHz over 2.5 – 4.0GHz and then connects the 7.5-18GHz amplifier to finish the test over 4.0-7.5GHz.

Some of you may be wondering why I did not simply use a low pass filter for the 2.5-7.5GHz amplifier. Answer – I wanted to demonstrate the use of both approaches. 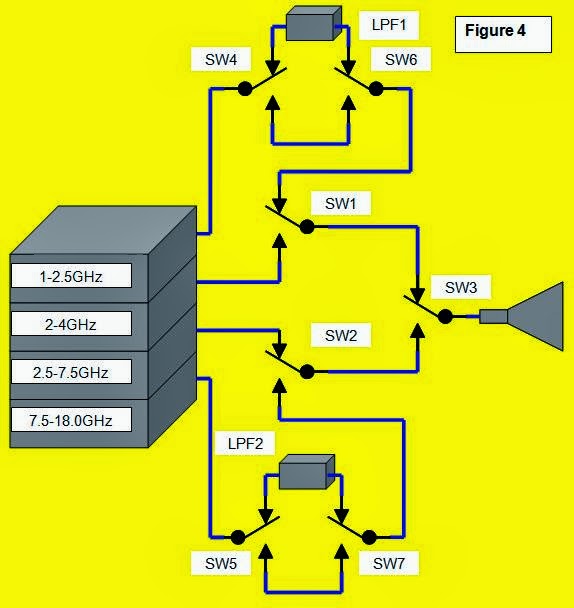 Next time we will look at the losses associated with the filters and determine whether the system can still create a lean 200v/m with a healthy safety margin.

RFIDs Jam Mobile Signals in the Philippines
Next Post »

Presented by AR - With so many different categories of components and systems with their own specific needs in terms of EMC, it is no surprise that … END_OF_DOCUMENT_TOKEN_TO_BE_REPLACED

In light of the global pandemic, growing numbers of cases in Europe, and related measures imposed by the respective authorities, European Microwave Week (EuMW) organizers have decided to make EuMW

EuMW is organized by Horizon House on behalf of the European Microwave Association (EuMA), an international non-profit association with a scientific, educational and technical purpose. Earlier this year, event managers postponed the live, in-person event in Utrecht, The Netherlands to 10-15 January 2021 in the hopes that the global pandemic would have subsided by then. It has now become evident that it would be extremely difficult to safely gather attendees and exhibitors in person this year.