Recap On this Thread

The consequence: equipments purportedly demonstrated to be resilient to 200v/m have in many instances been exposed to only around half this field strength, the rest of the test field created by an unintended frequency.

Welcome back readers, I hope 2014 is turning out well for you all.

I have spent more time on Elephant #1 than I intended, but I really want to plant the seed of the linearization of EMC amplifiers before leaving it. However, I will start introducing Elephant #2 “Lack of Harmony in Harmonic Limits” at the next posting regardless of where we are with Elephant #1. Also, I am a great believer in EMC engineers/technicians being conversant with the most common threat out there – cell phone signals, so in parallel with prodding elephants, I shall do a 101 on 3G and 4G wireless telecom signals (again, starting in the next post).

So where were we last year? – ah yes, Elephant #1, we had a fix for the system harmonics up to 7.5GHz, and were checking the power margin available if we were to place a filter to remove the start of band harmonics emitted by the 7.5-18GHz amplifier.

A back of the envelope calculation showed there was insufficient power if we go with the guaranteed minimum power available. If 250W is truly all that is available at the start of the band, then something fundamental needs to change (higher power amplifier $$$, or higher gain antenna $, or….).

The picture shows one way of doing this. Note we want to establish the power in the fundamental peak only, the intention is to remove the harmonic to the right will by filtering. 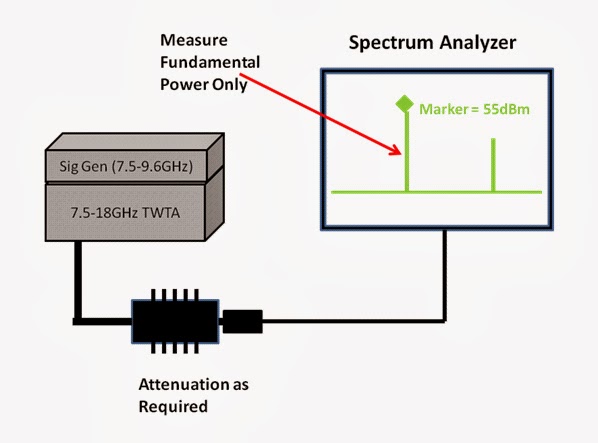 So if we are lucky enough to confirm we have sufficient power overhead, how much will the filter (diplexer) cost? As ever, it depends. If the design already exists I would hazard a guess at $2k-$3k. If a design does not exist, then non-recurring engineering charges will apply, and this could add $5-$7k, making a price of $7k-$10k. So it is worth doing a thorough search of all vendors to see if they already have a product, or at least one close enough that only needs tweaking.

Linearization is common enough in wireless telecoms, where the push for the technology came from economic necessity. Strangely it has not touched EMC amplifiers, perhaps because the number of amplifiers is relatively small and the market is too small to chase.

In my view, EMC amplifiers are ripe for the technology since compared to the very complex wireless telecom modulation schemes:

1. The signal to be linearized occurs at one spot frequency at a time
2. The EMC modulation schemes are the simplest there are, AND
3. The PC running the EMC software is idle for 99.9% of the time. This means a very powerful tool is available for any linearization scheme we choose to deploy

There are several linearization schemes, some of which I will mention here. Note: I use passive to mean the distortion element behaves the same irrespective of the amplifier output, and active to mean feedback is involved in the pre-distortion. 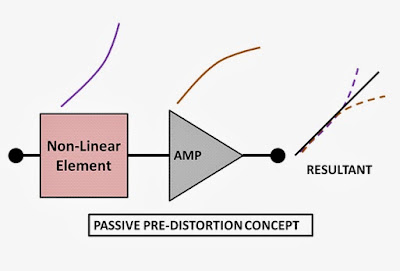 A non-linear element displaying gain-expansion where the amplifier has gain-compression distorts the input signal such that the resultant output is a straight line. 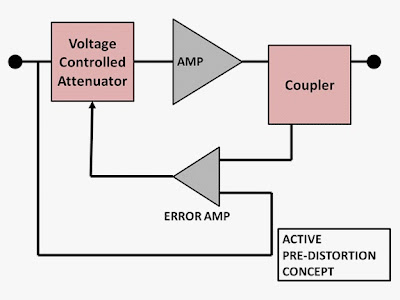 This is best explained by following the signal through the concept diagram. The input signal in this case is a two tone signal. 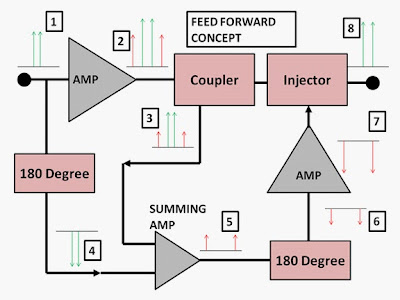 We will tackle the linearization of TWT amplifiers first, and at the next posting I will be proposing a form of active pre-distortion using the PC as the ‘brains’ of the error amplifier. But a different form of linearization could also be used to great advantage in lower frequency solid-state amplifiers since this allows ‘forbidden’ compressed power to be accessed. We will cover this in a later post.

In response to the comment on the previous post, “The Final Piece in the Conventional Approach,” that stated the calculation for required power, P = d^2 x E^2 / 30G watts, is not correct, Tom says,

“It is true that at a plane the power density is E^2/Zo (equivalent to power density = P/4Pixr^2 for a point source of power emanating spherically at a distance r from the point). But we are looking for the power required from an amplifier to create a certain field level at a certain distance using an antenna of certain gain G. I will elaborate on this in the next post. By the way, does anyone know where the magic number 30 comes from in the equation E = sqrt (30xPxG)/d^2 ? Years ago I looked for and couldn’t find the explanation in any textbook, and always thought it was a practical ‘fudge’ factor to make the v/m level come out right (or nearly right). Maybe the explanation is out there somewhere but I could not find it. Eventually, in the absence of any reference, I worked it out myself. Anyone know where it comes from before I tell you at the next post? You have a week.”

MLCCs for EMI Noise Suppression in Automotive Applications
Next Post »

10 inches narrower and 20 pounds lighter than a standard 4x60/100 amp filter panel, with no reduction in performance or quality. Designed for secure … END_OF_DOCUMENT_TOKEN_TO_BE_REPLACED

Presented by AH Systems - Engineers were not meant to be caged in cubicles or meeting rooms, engineers were meant to calculate. Their pencil … END_OF_DOCUMENT_TOKEN_TO_BE_REPLACED