It doesn’t take a crystal ball to know where the future of wireless is heading. With inexhaustible demand driven by 5G, 6G, and beyond, ultra-high-definition video, autonomous cars, security applications, and IoT, the sky’s the limit for utilizing the higher ends of the electromagnetic (EM) spectrum.

Meeting this demand requires products capable of capitalizing on the millimeter wave (MMW) bands that presently cover the frequencies between 30 GHz to 500 GHz. However, these higher frequencies present a significant problem that design engineers must address: that of standing waves. Without control, these unwanted waves can attenuate power output, distort the digital information on the carrier and, in extreme cases, damage internal components.

To counteract the problem of standing waves at lower microwave frequencies, engineers rely on Faraday rotation isolators, more commonly referred to as isolators. At their very basic level, an isolator is a two-port, input and output, component that allows EM signals to pass in one direction but absorbs them in the opposite direction. However, traditional isolators fall short at the higher frequencies required for next-gen wireless applications.

A big part of the problem is that the first isolators were designed more than a half century ago, with very few modifications since the original concept. With recent advancements, however, companies at the cutting edge of MMW technologies are gaining the ability to launch products that operate optimally at stratospheric frequencies.

“The new series of waveguide isolators have been a key enabling technology for VDI, and a large advance from what was previously available,” says Jeffrey Hesler, Ph.D., CTO of Virginia Diodes, Inc. VDI is a Virginia-based manufacturer of test and measurement equipment, such as vector network analyzer, spectrum analyzer, and signal generator extension modules, for MMW and THz applications.

“The compact size, extremely low insertion loss, and the wide bandwidth have allowed us to use isolators in a wider variety of our systems than was previously possible, and have led to significant improvements in key system performance metrics such as source power and sensitivity,” says Hesler.

By understanding these advancements in each of the five properties of isolator functionality, designers can better harness isolators to improve their MMW products.

Isolation is a measure of how much of the signal traveling in the reverse direction passes back through the isolator. Because isolators are intended to prevent, or minimize this from happening, the higher the isolation, the better.

The issue that MMW system designers face is impedance mismatches and the resulting reflections between components.

The highest possible isolation occurs when the reverse wave is rotated exactly 45 degrees into the plane of the isolator’s resistive layer. Isolation can degrade by as much as 10 dB when the signal rotation is off by just 1 degree.

The only way to confirm such precision is to fully characterize each isolator on a vector network analyzer. This validates total compliance, as opposed to just spot-checking at a couple of frequencies in the band.

While isolation is the namesake of these components, the suppression of the reverse wave can’t come at the expense of attenuating the forward, input signal. Insertion loss is a measure of how much loss a signal incurs as it passes through the isolator in the forward direction.

For traditional style isolators, insertion loss is low in the microwave bands, but at MMW frequencies the loss becomes increasingly problematic. For instance, in the WR-10 band (75-110 GHz) the insertion loss can exceed 3 dB, meaning half of the signal power is lost. In the WR-5.1 band (140 -220 GHz) the loss climbs to more than 5 dB. Because of high losses, traditional isolators are often precluded for use in MMW systems.

A designer’s main fear is that the isolator will significantly degrade the strength of the final output. It can be frustrating for engineers to try and tune the standing waves out of each system, usually with limited success. Many of the alternate methods used are narrow band in nature, so that the solution may work well only over an insufficiently narrow band of frequencies.

Faraday rotation isolators operate by using ferrite discs to rotate the signal. However, the traditional method to manufacturer them has been to use ferrites that are substantially longer than the minimum required length, and then tune the magnetic bias field to achieve optimal performance. This delivers good isolation, but at a much higher insertion loss. 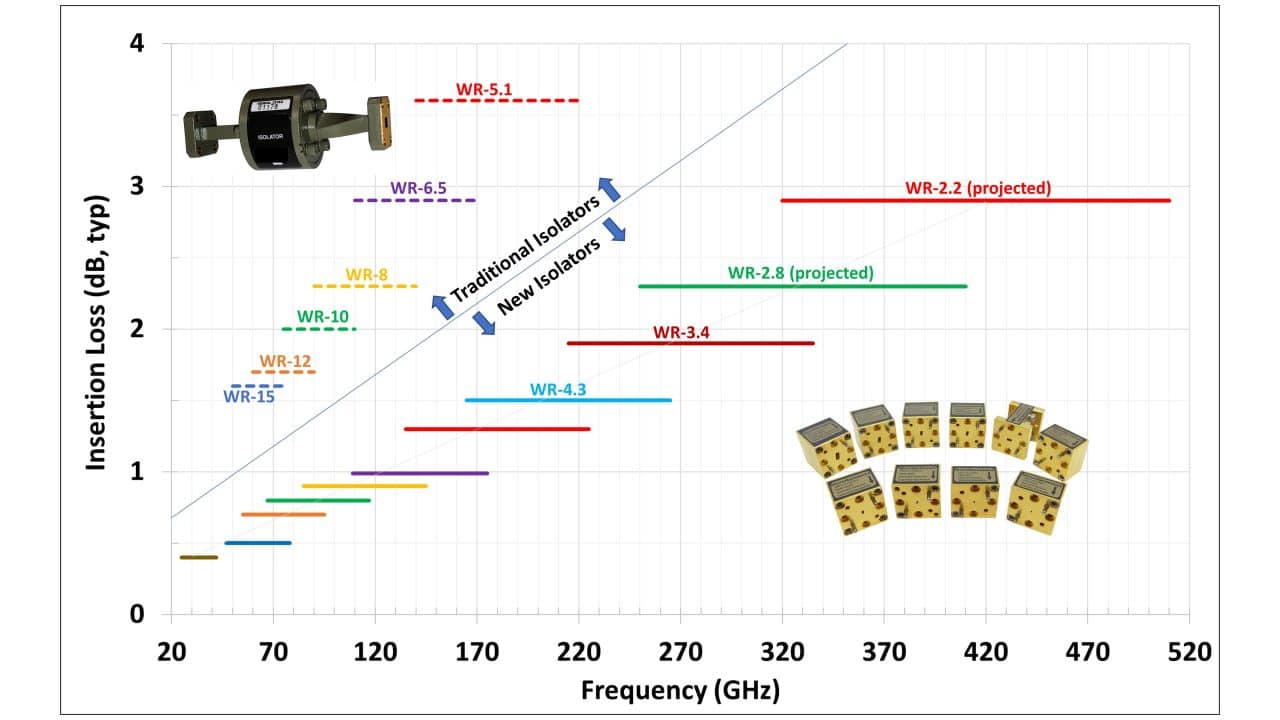 However, there is a two-fold problem with this workaround. First, there is more of the lossy ferrite in the signal path, and second, the ferrite loss parameter increases at lower magnetization levels.

To minimize loss, it is essential that the ferrite length be reduced as much as possible. The design developed for NASA saturates the ferrite with a strong magnetic bias field, which allows for the shortest possible length of ferrite to achieve the ideal 45 degrees of rotation. This lowers the insertion loss to less than 1 dB at 75-110 GHz and only 2 dB at 220-330 GHz.

“The extension of isolator technology above 220 GHz is an impressive technical feat, and a key technology that enables us to deliver accurate measurements with higher sensitivity than we were previously able to achieve,” notes VDI’s Hesler.

A good isolator must also have low port reflections. Voltage standing wave ratio (VSWR) is a measure of the reflections at the input and output ports. A good range at MMW frequencies is 1.5:1 or less; 1:1 equals no reflection.

The importance of low port reflections is often overlooked. An isolator with high port reflections creates an alternate set of standing waves. The adjacent components are still adversely impacted by out-of-phase signals reflected back into their ports. High isolation and low insertion loss are of little value if the port reflections are large.

Power in the reverse traveling signal is absorbed in the isolator, resulting in heat. The more heat it can handle, the higher the power rating. Historically, high heat was not an issue as there was very little power available at MMW frequencies. However, as higher power sources become available, the importance of power ratings increases.

To handle the problem of high heat loads, some newer isolators are already incorporating diamond heat sinks into their design. Diamond is the ultimate thermal conductor, approaching 2,200 W/m•K, more than five times higher than copper. Diamond effectively channels heat from the resistive layer in the isolator to the metal waveguide block, and thus lowers operating temperatures for improved reliability.

Minimizing the size and weight of MMW components is especially important in today’s wireless applications.

A standard traditional-style isolator in the WR10 band is about 3 in. long, with a cylindrical section in the center that’s about 1.3 in. in diameter. But the newest design shapes are rectangular and can be as small as 0.75 in. per side and 0.45 in. thick.

The same technology used to reduce insertion loss—utilizing the shortest possible length of ferrite—also partially accounts for the reduction in footprint. 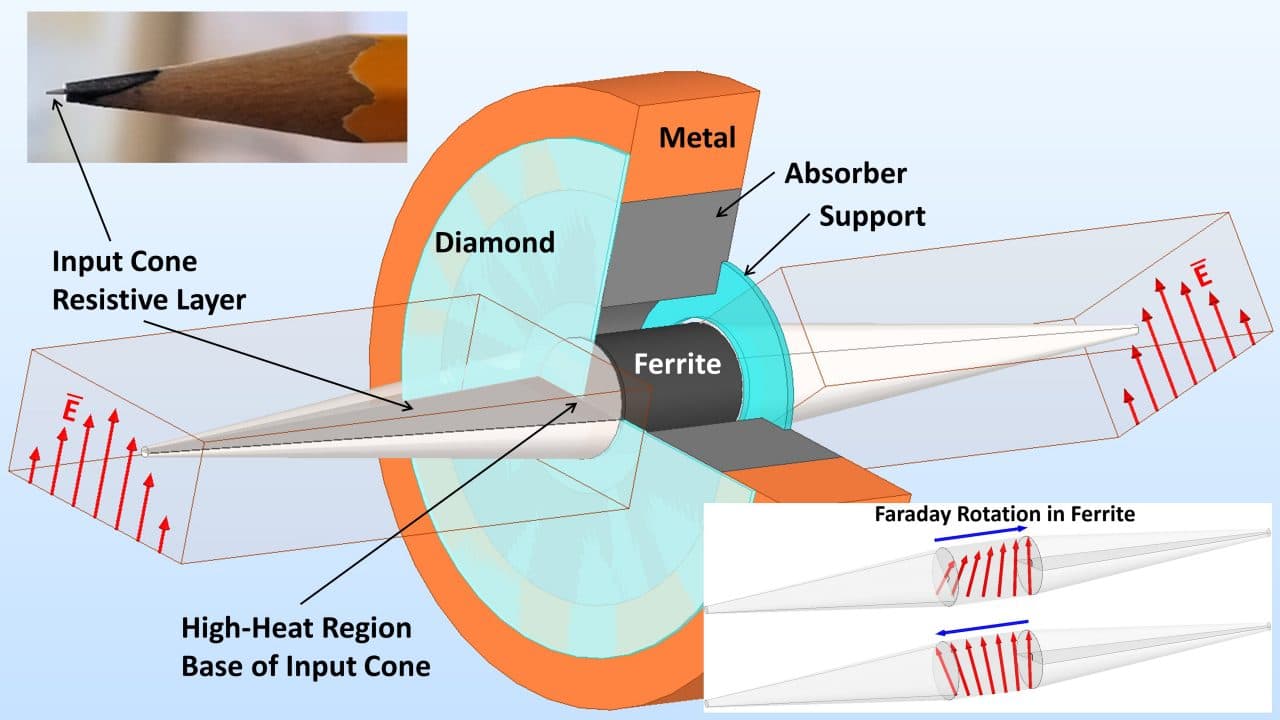 In addition to the five critical characteristics, other properties of modern isolators improve their utility at MMW frequencies; for instance, wide bandwidth. Standard waveguide bands typically extend to 40% on either side of the center frequency. Newer, high-performing isolators operate over extended bandwidths exceeding 50% from center frequency, giving designers greater freedom to build more bandwidth into their systems.

Additional advances include isolators that operate in cryogenic conditions, which is critical because a traditional isolator designed for room-temperature operation will perform poorly when cooled.

Sponsored by Schurter SCHURTER’s innovative FMAD CEE and FMAB CEE connectors, according to IEC 60309, feature a first of its kind integrated line … END_OF_DOCUMENT_TOKEN_TO_BE_REPLACED

In co-operation with EMC Standards, we are re-launching the event as “EMC & Compliance International” as an independent event back at the updated Newbury Racecourse. The Training Workshops by Keith Armstrong and the Technical Workshops also organized by Keith will be running alongside the exhibition. If you are in the EMC or related Compliance business, then this is an event not to be missed.

The IEEE Microwave Theory and Techniques Society’s 2021 International Microwave Symposium (IMS2021) will be held June 6–11, 2021 at the

The IEEE Microwave Theory and Techniques Society’s 2021 International Microwave Symposium (IMS2021) will be held June 6–11, 2021 at the Georgia World Congress Center in Atlanta, Georgia. You are cordially invited to join us in Atlanta at the intersection of communications, aerospace, automotive,

APEC is the leading conference for practicing power electronics professionals and addresses a broad range of topics in the use, design, manufacture, and marketing of all kinds of power electronics equipment. Join us June 9-12, 2021 in Phoenix, AZ.

The Applied Power Electronics Conference (APEC) focuses on the practical and applied aspects of the power electronics business. This is not just a designer’s conference; APEC has something of interest for anyone involved in power electronics:

APEC 2021 continues the long-standing tradition of addressing issues of immediate and long-term interest to the practicing power electronic engineer. Outstanding technical content is provided at one of the lowest registration costs of any IEEE conference.

August 28, 2020: Deadline for submission of digests

October 28, 2020: Notification that a paper was accepted or declined

November 20, 2020: Final papers and author registrations are due