For most of us, electrostatic discharge (ESD) and static electricity are little more than the shocks received when touching a metal doorknob after walking along a carpeted floor, or when opening a car door. The level of the voltage produced depends on a number of factors, such as the affinity of the two bodies and the air humidity. Even so, these “harmless” shocks can reach values over 25,000 V.

ESD can be defined as a rapid transfer of charge between bodies at different electrical potentials – either by direct contact, arcing, or induction – in an attempt to become electrically neutral. The human threshold for feeling an ESD is only around 3000 V, so any discharge that can be felt is above this voltage level. Because the duration of this high voltage spike is less than a microsecond long, the net energy is small compared to the size of the human body over which it is spread. From the human body’s point of view, ESD does no harm. But when the discharge is across a small electronic device, the relative energy density is so great that many components can be damaged by ESD at levels as low as 3000 V or even 500 V.

ESD damage can occur at any stage of a component’s life, from manufacturing to service. For many years it was thought that semiconductor components such as diodes and transistors were particularly susceptible to ESD, but now we know that passive components such as resistors can sometimes be more sensitive to ESD than active components. Unless specific precautions are taken, a wide range of electronic components can be damaged by ESD. The most common cause of ESD damage is direct transfer of an electric charge from either a human body or a charged material to an ESD-sensitive (ESDS) device.

In resistors, ESD sensitivity is a function of size, value, physical construction and thickness. The smaller the resistor, the less space there is to spread the energy caused by an ESD pulse. When this energy is concentrated in a small area of a resistor’s active element, and in particular where there is a high current density or “hot spot,” the resistive element may heat up to the point of sustaining irreversible damage. With the growing trend of miniaturization, electronic devices, including resistors, are becoming smaller and smaller, causing them to be more prone to ESD damage. Resistance changes due to ESD damage, like load-induced changes, are permanent and can either increase or decrease the device’s resistance value depending upon the resistor’s design and technology.

Different resistor technologies exhibit various levels of sensitivity to ESD damage. Damage to an ESDS device depends on the device’s ability to dissipate energy and withstand the energy of the voltage levels involved, and in resistors is generally exhibited by a change in the electrical resistance of the device. This is especially crucial in resistors requiring high precision and reliability.

The three most common resistor technologies are Thin Film, Thick Film, and Bulk Metal Foil. Each has specific characteristics related to ESD sensitivity.

Manufacturers test for ESD sensitivity (ESDS) per customer request, but usually do not publish ESDS specifications in their data sheets. However, the ESD of precision chip resistors depends on the following:

In testing the influence of above factors, the results depend also on the test method used.

Bulk Metal Foil chips are produced by cementing a nickel-chromium alloy foil, rolled to a thickness between 2 and 10 microns, to a ceramic substrate. Thin Film chip production involves deposition (by evaporation, sputtering or similar methods) on a ceramic substrate of a film, mainly nickel-chromium or Tantalum Nitride. A typical thickness of the Thin Film layer is about 1/100 of the Bulk Metal Foil.

Table 2 represents chips which are made in standardized sizes, in rectangular shapes. In the middle of the rectangle is a pattern formed in the resistive layer of foil or Thin Film, connected on two sides to two termination pads.

Tables 3, 4, and 5 show the results of ESD tests on Thin Film, Thick Film, and Foil resistor chips. The superiority of Bulk Metal® foil precision resistors over Thin Film, when subjected to ESD, is attributed mainly to their greater thickness (foil is typically 100 times thicker than Thin Film), and therefore the heat capacity of the resistive foil layer is much higher compared to the Thin Film layer. Thin Film is created through particle deposition processes (evaporation or sputtering), while foil is a bulk alloy with a crystalline structure created through hot and cold rolling of the melt. Tests show that Bulk Metal Foil chip resistors can withstand ESD events above 25 000 V, while Thin Film chip resistors have been seen to undergo catastrophic failures at electric potentials as low as 3000 V and parametric failures at even lower voltages. If the application is likely to confront the resistor with ESD pulses of significant magnitude, the best resistor choice is Bulk Metal Foil. 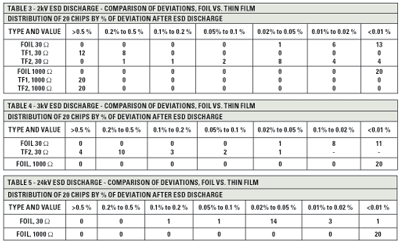 ENERGY OF ESD ABSORBED BY A RESISTOR CHIP

YUVAL HERNIK holds a B.Sc in electrical engineering from the Technion (Israel Institute of Technology). He has been a director of application engineering at Vishay Precision Group—Bulk Metal Foil resistors—since 2008.

Sponsored by Schurter SCHURTER’s innovative FMAD CEE and FMAB CEE connectors, according to IEC 60309, feature a first of its kind integrated line … END_OF_DOCUMENT_TOKEN_TO_BE_REPLACED